Our edition of Dubliners, edited by Keri Walsh, is now available! We’d like to share an excerpt from Appendix A of our new edition. 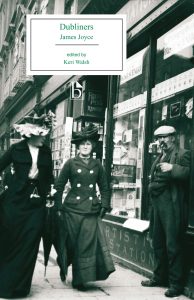 Freedom from sloppiness is so rare in contemporary English prose that one might well say simply, “Mr Joyce’s book of short stories is prose free from sloppiness,” and leave the intelligent reader ready to run from his study, immediately to spend three and sixpence on the volume.

Unfortunately, one’s credit as a critic is insufficient to produce this result.

The readers of The Egoist, having had Mr Joyce under their eyes for some months, will scarcely need to have his qualities pointed out to them. Both they and the paper have been very fortunate in his collaboration.

Mr. Joyce writes a clear hard prose. He deals with subjective things, but he presents them with such clarity of outline that he might be dealing with locomotives or with builders’ specifications. For that reason one can read Mr. Joyce without feeling that one is conferring a favour. I must put this thing my own way. I know about 168 authors. About once a year I read something contemporary without feeling that I am softening the path for poor Jones or poor Fulano de Tal.

I can lay down a good piece of French writing and pick up a piece of writing by Mr. Joyce without feeling as if my head were being stuffed through a cushion. There are still impressionists about and I dare say they claim Mr. Joyce. I admire impressionist writers. English prose writers who haven’t got as far as impressionism (that is to say, 95 per cent of English writers of prose and verse) are a bore.

Mr. Joyce’s merit, I will not say his chief merit but his most engaging merit, is that he carefully avoids telling you a lot that you don’t want to know. He presents his people swiftly and vividly, he does not sentimentalize over them, he does not weave convolutions. He is a realist. He does not believe “life” would be all right if we stopped vivisection or if we instituted a new sort of “economics.” He gives the thing as it is. He is not bound by the tiresome convention that any part of life, to be interesting, must be shaped into the conventional form of a “story.” Since De Maupassant we have had so many people trying to write ‘stories’ and so few people presenting life. Life for the most part does not happen in neat little diagrams and nothing is more tiresome than the continual pretence that it does.

Mr. Joyce’s “Araby,” for instance, is much better than a “story,” it is a vivid writing.

It is surprising that Mr. Joyce is Irish. One is so tired of the Irish or “Celtic” imagination (or “phantasy” as I think they now call it) flopping about. Mr. Joyce does not flop about. He defines. He is not an institution for the promotion of Irish peasant industries. He accepts an international standard of prose writing and lives up to it.

He gives us Dublin as it presumably is. He does not descend to farce. He does not rely on Dickensian caricature. He gives us things as they are, not only for Dublin, but for every city. Erase the local names and a few specifically local allusions, and a few historic events of the past, and substitute a few different local names, allusions and events, and these stories could be retold of any town.

That is to say, the author is quite capable of dealing with things about him, and dealing directly, yet these details do not engross him, he is capable of getting at the universal element beneath them.

There is a very clear demarcation between unnecessary detail and irrelevant detail. An impressionist friend of mine talks to me a good deal about “preparing effects,” and on that score he justifies much unnecessary detail, which is not “irrelevant,” but which ends by being wearisome and by putting one out of conceit with his narrative.

Mr. Joyce’s more rigorous selection of the presented detail marks him, I think, as belonging to my own generation, that is, to “nine-teen-tens,” not to the decade between “the ‘nineties” and to-day.