Working Together with Henry Mayhew: An Invitation

[Barbara Leckie and Janice Schroeder, editors of the new Broadview edition of London Labour and the London Poor, invite you to join in on the conversation about Mayhew in the 21st century. What does his work have to do with where we are, and what challenges we’re facing today? To share your thoughts and contribute to the conversation, email janice.schroeder@carleton.ca or barbara.leckie@carleton.ca.] 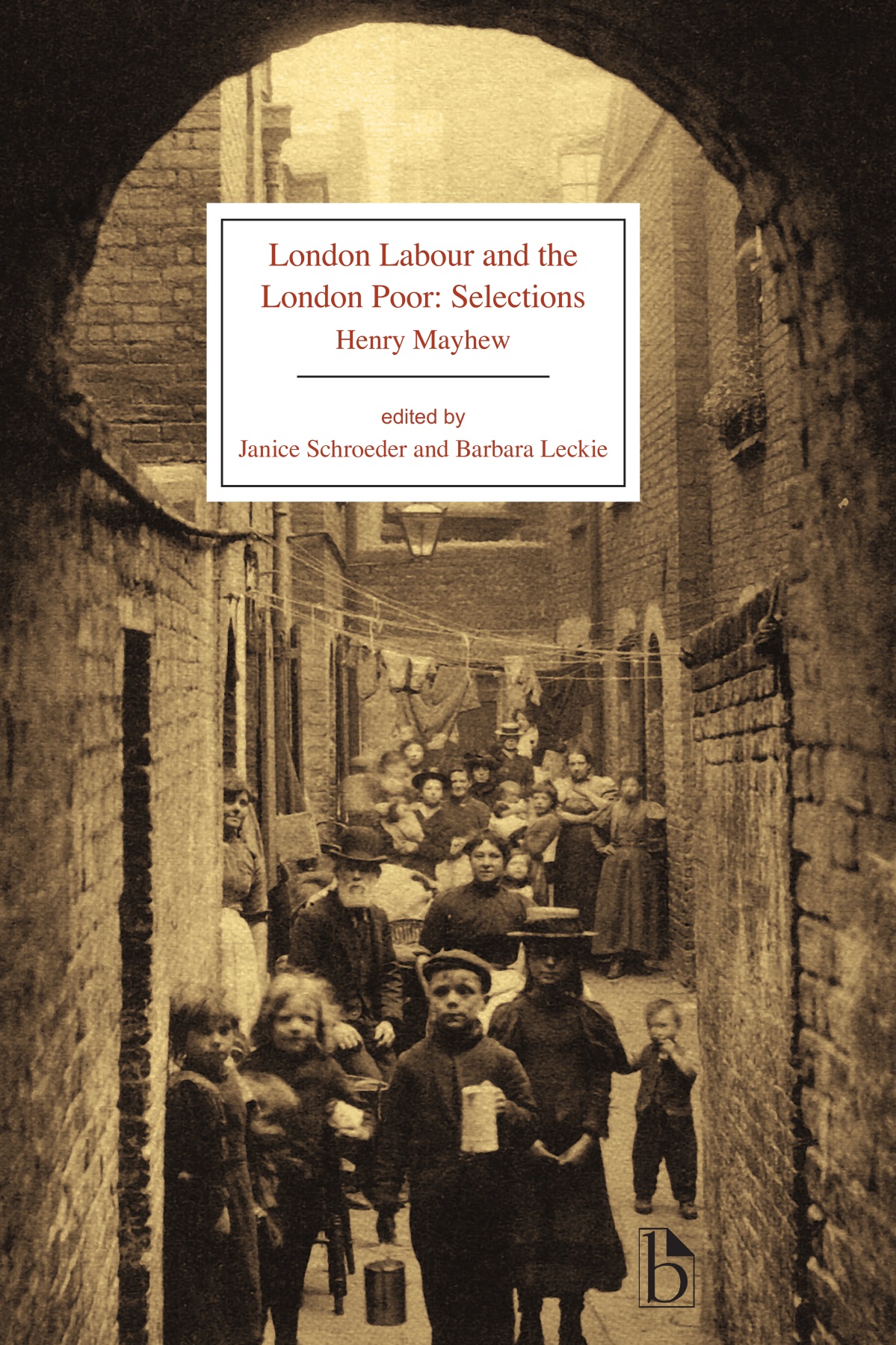 Yet in working together for three years on a new edition of London Labour and the London Poor, we were so often reminded of what we share with Mayhew: questions no less pressing in our time than they were in his. Like Mayhew, our work is animated by issues of social injustice, wage equity, political economy, technological innovation and the loss of traditional forms of labour, and the impact of human industry on the natural world. The creative flare and capacity for reinvention that characterize precarious urban livelihoods illuminate all of these issues from new angles.

Mayhew’s work continues to incite and energize readers. We want to build on that energy by inviting scholars, teachers, and students of Mayhew and London Labour to contribute to a blog forum in which we draw connections between Mayhew’s concerns and our own. What does Henry Mayhew’s work have to do with you, where you are now?

The idea for a blog forum on London Labour derives from what we came to see as one of the informing principles of Mayhew’s work itself: collaboration. Mayhew could not have written the pieces that have so deeply contributed to our comprehension of poverty and social life in mid-nineteenth-century London without collaborating with the poor who are the main source of the originality of his material. As many commentators observe, he seemed to have a rare knack for striking up conversations, gaining the trust of his interlocuters, and capturing the details that lent individuality and depth to the lives he recorded: the accent of a voice, the style of the clothes worn, the family connections that were valued. Mayhew accompanied the poor on their daily improvised work rounds, he stood by their carts as they sold their wares, he went into their homes, and he organized meetings to agitate for the extension of their rights. Most of all, perhaps, he evinced a keen interest in what they had to say that led to the sharing of stories hitherto unheard by middle-class readers.

Collaboration means to work together and it is clear from the testimonies recorded in the pages of London Labour that Mayhew worked with the poor. To be sure, Mayhew also reformulated what he heard and sometimes paraphrased it in his own words. He was not immune to the biases of his period, he sometimes shared the racist and classist views of his time and contributed to their dissemination, and he drew on much published material (paraphrased as well as what we would call today plagiarized) to communicate his account of London labour and the London poor in ways that have not been fully appreciated. But the spine of the work, its enduring capacity to transfix and surprise, follows from what we might think of as his collaboration with the poor. London Labour and the London Poor is not one thing or another: collaborations open authors and workers to multiple voices that cannot quite be ironed out, lines of thought that do not always lead to neat conclusions, rough edges and unruly transitions, that make this work what it is today: frustrating, fascinating, and endlessly repaying attentive reading.

Because Mayhew collaborated so closely with the poor, London Labour is, strictly speaking, composed by both Mayhew and the countless, largely anonymous, voices he includes in his study. It is a dialogue in which Mayhew initially had the authority—he asked the questions, he had the access to publishing platforms, he walked into, and then out of, the lives that the poor lived. But we can also see evidence of that authority ceded and abraded by the unexpected, and sometimes inconvenient, synergies that collaborations produce.

Mayhew’s work is also a collaboration in another way that bears on our understanding of authorship. Mayhew worked with many colleagues to collect the testimonials from the poor that contribute to the distinctiveness of his work. “Henry Mayhew” is, indeed, a placeholder. The volumes under this name, the multi-authored, multi-edited work we now call London Labour and the London Poor, was the work of many people working together. Mayhew initially worked with a team from The Morning Chronicle and later, when he forged out on his own, he worked with a team again. Mayhew credits Henry Wood and Richard Knight as integral to his work on London Labour, even going so far as to attribute co-authorship to Wood in his Preface to Volume 1. Further, due to numerous factors recorded here, Mayhew did not edit Volume 3 at all, and volume 4 contains only a small fraction of his own writing. But it is convenient for us to have a name. And in his own period, as now, a name that carried recognition, even celebrity value, contributed to the success and impact of his publications.

It is fitting in these contexts that we collaborated as editors on the new Broadview edition of Mayhew’s work. We were also lucky enough to have a stellar graduate research assistant, Jenna Herdman, who helped us at every stage of our project. We spent many long afternoons sitting together, Mayhew’s volumes and relevant documents spread out in front of us, computers open, deciding what to include and what (reluctantly) to exclude; we experienced the thrill together when we found the answer to an annotation that had eluded us; and our appreciation for Mayhew only grew as we worked. Collaboration, we learned, also introduces vulnerabilities. The beauty of collaboration, however, is that those vulnerabilities were at once more visible—we knew about each other’s writing habits and weaknesses—and they were shared. We did not try to evade what we didn’t know but rather sought to resolve such gaps collectively.

Our afternoons poring over Mayhew documents at a large dining room table were also supplemented by one of the most rewarding forms of collaboration that this project took: a series of collaborative MA seminars on editing Mayhew’s London Labour. As editors we not only collaborated with each other in the design of this course but also, more importantly, collaborated with our students who all became, over the course of the semester, editors alongside us. They told us what selections they hoped for, why they mattered, and how they responded as new readers to Mayhew’s idiosyncratic and lively texts. They became as invested in certain entries as we were, eagerly tracking their evolution from edited selection to fully annotated piece. Their questions and comments made this edition much stronger than it would have otherwise been and also helped us to see the manifold ways in which Mayhew’s work retains critical purchase today. We hope that this forum may encourage further collaborations within new classrooms as new groups of students encounter Mayhew and find connections and resonances we have not yet imagined.

We invite responses to this forum from professors and students, scholars and laypeople, on the temporal collaborations Mayhew’s work generates. We are eager to think about collaboration in its multiple facets from labour precarity, climate change, “resilience” (in all its fraught dimensions), critical philology (then and now), the digital humanities, and the resemblances between Mayhew’s project and contemporary successors, like the street blog Humans of New York, among others. We also invite you to write about your own collaborative experiences, the rewards and the pitfalls, as well as troubleshooting tips that may be helpful to others. And because teaching is always a collaborative enterprise, entries on teaching from a range of perspectives are also welcome. We celebrate collaboration as a messy art that does not close down inquiries but rather opens them up. In this spirit we invite you to collaborate with us, to work together with us, in this forum. What does Henry Mayhew’s work have to do with you?