The Legacy of Thoreau’s Civil Disobedience 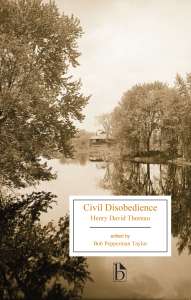 As the streets of America fill with protesters on a nearly weekly basis since the inauguration of President Trump last month, the writings of Henry David Thoreau remain as relevant as ever. One of his most well-known works speaks to the importance of “cultivating personal integrity in the face of political injustice” according to Bob Taylor’s introduction to the work in Broadview’s recent edition of Civil Disobedience,

The conventional narrative surrounding Thoreau and his essay is one of principled and peaceful non-compliance with an unjust government. The story starts in 1846 when Thoreau refused to pay his poll tax ($1.50 tax paid on a yearly basis by Massachusetts citizens) to the government of Massachusetts. He chose to withhold his tax not due to a lack of funds, but because his state government was complicit in enslavement in the southern states and in the Mexican-American War; Thoreau did not want to be implicated in these injustices through paying the tax. After a confrontation with a constable about his refusal to pay the tax on moral principle, Thoreau was thrown into jail. After his release, he gave a lecture “on the relationship of the individual to the state,” which was published as the essay now known as Civil Disobedience.

Contrary to the conventional account of Thoreau as an organizer of group protest against the ills of his government, Professor Taylor puts forward a different narrative. As Taylor points out in his introduction to Civil Disobedience, the essay is “noticeably short on efforts to persuade the reader of the injustice of either American slavery or American imperialism,” and instead focuses on “personal choice and individual responsibility.”

Today a small group of American citizens are taking inspiration from Thoreau. In an article for The Guardian Joanna Walters reports on some citizens who are refusing to pay federal income tax under the Trump administration because they believe that paying taxes to the federal government makes them complicit in actions taken by that government..

There is even a National War Tax Resistance Coordinating Committee, which is an organization that encourages citizens to follow in the footsteps of Thoreau in the name of peace, and advises them on how to participate.

In her article, Walters notes that “Benn [NWTRCC’s coordinator] said enthusiasm for tax resistance appeared to be growing in the Trump era, though cautiously. Visits to the committee’s rudimentary website have doubled in recent weeks to about 1,500 a day. The committee estimates that about 8,000 people a year refuse to pay US federal income tax as an act of civil disobedience, and that number is expected to rise.”

To learn more about Thoreau’s famous essay you can see Professor Bob Pepperman Taylor giving a lecture on “Reading Thoreau in the 21st Century” here, or get a copy of his edition of Civil Disobedience here.