“another claimant for the … discovery of the sources of the White Nile”: Captain Singleton and Geographers Gone Wrong

[Manushag Powell, editor of the Broadview edition of Captain Singleton, shares a piece of history on the imagined African geography of Singleton and the reception of the novel and its cartography the 19th century.] 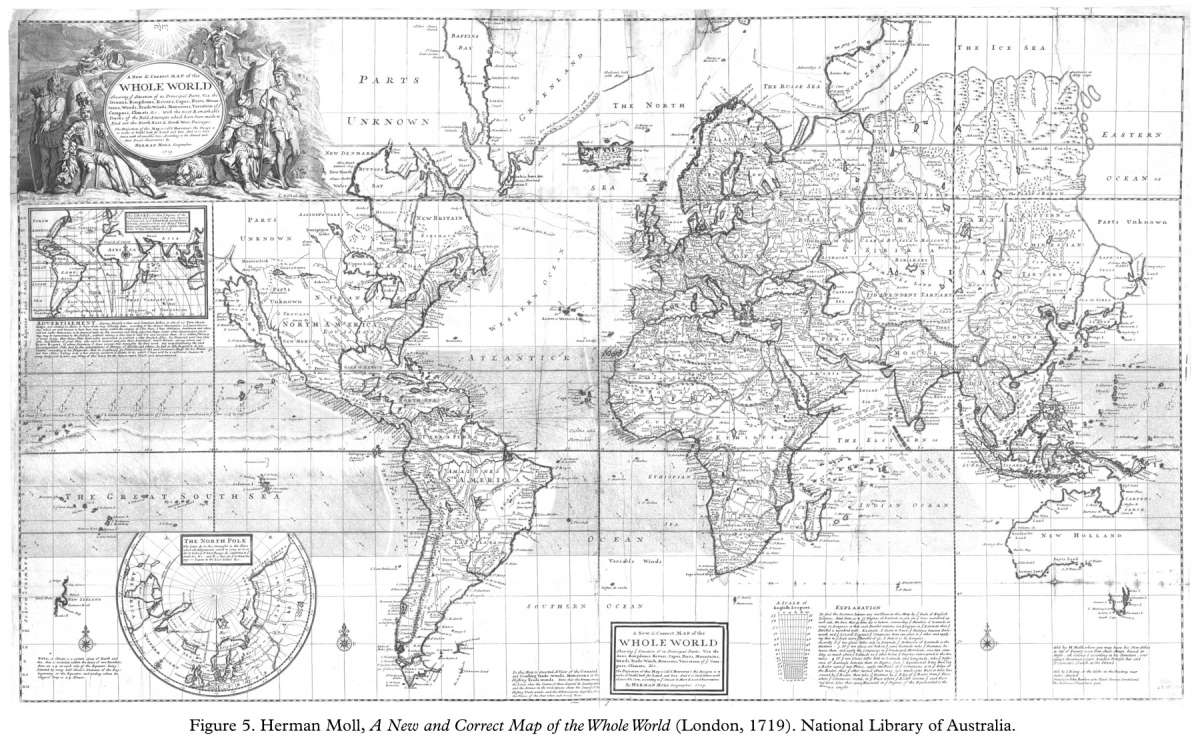 One of the main points of interest in Daniel Defoe’s piratical Captain Singleton (1720) is its extensive description of an east-to-west (and accidentally south-to-north) trek across the sub-Saharan African continent. Singleton’s group attempts to be methodical about their journey, even hoping to make discoveries about the workings of the great African riverways, but again and again find themselves out of their reckoning, as the European maps they have to guide them are no better than best guesses, and the coastal guides they have enslaved are soon well beyond their ken. It is tempting, when reading Captain Singleton, to try to follow the African trek on a map, but as I discuss in my introduction, these attempts always fail. Defoe is not operating with any secret knowledge of African cartography, and so modern maps quickly become confounding; and while Defoe is in interested in the plausible, he is also not bound by any particular contemporary European maps. His imagined geography is, ultimately, its own construction.

When Defoe was writing, although curiosity about the interior of the continent was strong, no European account of anything approaching the journey Singleton takes was extant. For example, while Pedro Páez Jaramillo had visited the headwaters of the Blue Nile in the early seventeenth century, his História da Etiópia would not be printed or widely known for centuries; James Bruce’s real but widely disbelieved account of his own journey to find the source of the Nile would not appear until the 1780s. But European readers loved to try to render Singleton’s journey onto an external geography anyway. Particularly in the nineteenth century, a cottage critical industry arose, insisting (dubiously) on the preternatural accuracy of Defoe’s African descriptions, and speculating about his sources. “Still it is curious that Defoe should have been right about the Congo when the Dutch, English, and French mapmakers were all wrong,” muses one reader, hopefully concluding, “The probability is that he got his information from Portuguese sources” (“Through the Dark Continent in 1720,” W. Minto, Macmillan’s Magazine (1878), p. 465).

In 1858, four men named John Hanning Speke, Richard Burton, Sidi Mubarak Bombay, and Mabruki went on a journey in search of Africa’s massive great lakes, and Speke and Burton disagreed (quite loudly) over whether they had found the Nile’s source in Lake Victoria or Lake Tanganyika. And in the publicity over their subsequent debate, we find perhaps the best compliment of all to Defoe’s ability to capture his readers: a geographer named James M’Queen gives the explorer Singleton credit for being the first European to track the headwaters of the White Nile, pausing along the way to chuckle over Singleton’s characteristic dry humor, and to linger in European fashion over the irrelevant and invented detail of an unknown group of people in Africa who live entirely in the nude.

Before coming to a conclusion, we must notice a work, published at Edinburgh in 1810, by De Foe [the reference is to Sir Walter Scott’s edition of The Novels of Daniel De Foe]. Extracts from it have been sent to us by the Secretary of the Asiatic Society of Bombay. These give a concise account, so far, of a journey undertaken in 1720 from the East Coast of Africa, commencing in about 12°S. lat., with the intention of proceeding across the continent to the Congo in Angola. The journey is attributed to Captain Singleton and his ship’s crew. They passed to the northward of Lake Nyassa, and thence proceeding they came upon what must have been Lake Tanganyika, near its south end, as they struck it in 6.22° S. lat. After 23 days alongside of it northwards they rounded it, and were told they could not proceed westward to gain the Congo because another great lake lay in the way. They marched north along its western shore till they came to its end a little beyond the Equator, where they found a considerable river running north, which they set down as the Nile, but not wishing to go that route they turned to the westward, and finally, after many delays, taking from necessity different routes, they reached the Gold Coast. In the country to the north of the lake last mentioned they came upon a nation of negroes, who went, old and young, quite naked. They also met, in an uninhabited part, with a hideous serpent of fearful aspect and fangs, which threatened to attack them, and whose hissing was heard to a great distance. His men insisted it was the Devil, but this he says could not, for a droll reason, be the case, because the Devil was not likely to be found in a country where there were no inhabitants. We have not ourselves seen this book, but the author of it seems to have written it with some knowledge of this portion of Africa. Here is, therefore, another claimant for the honour of the discovery of the sources of the White Nile.