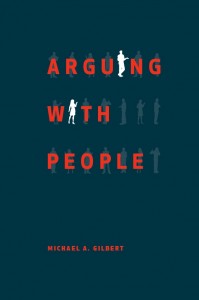 In the following interview, Michael Gilbert talks arguments with Stephen Latta, Broadview’s Philosophy Editor. Gilbert’s new book draws together insights from Argumentation Theory and our experience of everyday arguing to challenge and deepen how we approach critical thinking.

SL: What is Argumentation Theory?

MG: Argumentation Theory is an area of study that draws upon philosophy, social psychology, communication theory, rhetoric, linguistics, and discourse analysis. Its roots lie in the 1950s, but it really came into its own in the 1970s. Scholars in all these disciplines came to realize that their interest in interpersonal disagreement intersected in many ways, and that by looking across disciplines we would come to understand interpersonal argument in a deeper and more realistic way. Today in numerous journals and conferences we share interdisciplinary approaches and thereby enlarge our stock of tools for understanding everyday argumentation.

SL: In the introduction to your book, you indicate that knowledge of recent advances in Argumentation Theory can be of use to “the many people whose occupations and interests involve them in argumentation on a daily basis.” Can you give an example of how such knowledge may be useful in an everyday context?

MG: We engage in arguments all the time. Some are important and loom large, while others are virtually trivial. Once you commit to an argument you need to understand its dynamics, its importance to you, and its importance to your argument partner. If you become aware of the goals involved in a dispute, pay attention to the personalities, and take into account the context and relationships involved, a difficult argument can become a simple and straightforward one. Whether it’s in business or at home, there’s always a lot in play. While knowing about argument is important, it is not the same as knowing how to argue, and that knowledge is vital in everyday contexts.

SL: Students of philosophy are often taught that arguments are good or bad independent of context or method of presentation. Do you believe that this view is mistaken?

MG: Most university students take a course in Critical Thinking or Critical Reasoning, and those are important courses. They teach argument structure, relations between premises and conclusions, and the importance of relevance and evidence. However, in real arguments that take place in the office, boardroom or kitchen, there is much more going on. Who you are arguing with, why you are arguing, where you are arguing—these are all factors ignored by the traditional structural approach, yet they can often be the most crucial. For example, I would even go so far as to state that it is not always a good idea to point out your partner’s argument mistake, be it a logical error or the commission of a fallacy. Sure, recognizing it is important, but how that knowledge is used is something else entirely.

SL: You note that we most often argue with our “familiars” (friends, family, and others with whom we are in regular contact). But some people hold that it is best to avoid arguments with friends and family whenever possible. Do you think this is good advice, or is there something valuable or important about engaging in arguments with familiars?

MG: The first questions any arguer should ask are these: Should I enter into this argument? What’s in it for me, and what’s in it for my partner? Sometimes the outcome is not all that important, and you may choose to ignore the statement or attitude and move on. At other times, the belief or values being expressed are something you care about and want to try and change. So sometimes there is something very valuable in arguing with friends and family, at other times it’s just not worth the effort, and in still others the emotional costs may be too high. You need to remember too that when we argue with familiars, we know a lot about them, and they about us. It is also important to keep in mind that many arguments do not take place in a set time and place. They frequently boil up and simmer down, and they can take weeks or months to resolve themselves. So avoiding arguments is relative to time and place as well as to the person with whom you are arguing.

SL: In some ways, academic writing seems designed to strip away the direct, interpersonal elements of conversational argument – threads of discussion in academic journals often take years or even decades to play out, and scholarly reviewers are typically blind to the identity of authors. Do you think this is in any way a hindrance to progress in scholarly arguments?

MG: This is a difficult question for me to answer, if for no other reason than I have been trained in this approach and it is deeply instilled in me. I certainly wouldn’t want academic journals to become like so many Internet bulletin boards, loaded with personal attacks and diatribes. On the other hand, I do try personally to make my academic writing a bit contextually rich, and do not pretend I am writing in a vacuum. The other consideration is that the counterpoints to the aridity of journal writing are the conferences we all attend. The interactions there are where the context, personalities, and interpersonal elements come into play. Sometimes minds even change!

SL: You have published other books on argument. How do you see Arguing with People fitting in with those?

MG: The first book I ever published on argumentation was in 1979 and is How to win an Argument, now in a 3rd edition. That book was very introductory and focused primarily on the topics popular in Critical Thinking. The new edition contains more modern material but it is still a popular introduction to Critical Reasoning. Later, in 1997 I published Coalescent Argumentation, which is a more scholarly work (i.e., harder) that introduces many of the concepts I developed in my research over time. Arguing with People, on the other hand, takes much of the more scholarly material and makes it available and understandable to the lay reader or college student. In this way I hope to make the general public aware of the breadth of research going on in Argumentation Theory.

Michael A. Gilbert is Professor of Philosophy at York University.