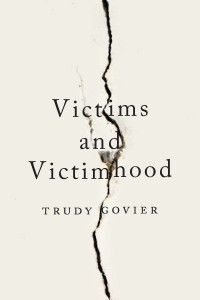 Broadview Press is proud to have recently published Victims and Victimhood by Trudy Govier, a careful examination of the concept of victimhood. Issues are explored with reference to a range of complex examples, including child victims of institutional abuse and the famed Rigoberta Menchú controversy. Further topics include the authority of personal experience, restorative justice, restitution, forgiveness, and closure.

In the following interview, Broadview Philosophy Editor Stephen Latta engages Govier in conversation about some of the key questions posed by her work.

SL: In the introduction to Victims and Victimhood you suggest that, while issues related to victims have been much discussed in other academic fields, they have been comparatively neglected in philosophy. What is unique about a philosophical approach to the discussion of victims, and why is it valuable?

TG: A philosophical approach is unique in the ways in which it explores definitions, assumptions, and value judgments. It has much to offer in thoroughly considering differing perspectives and the reasons for and against these. Furthermore, such an approach can relate the issues to broader theories in ethics, epistemology, and political philosophy. Two central issues in these areas are those of credibility (epistemology) and punishment (political philosophy).

SL: How do you see the philosophical discussion of victims connecting to the work of victim advocacy groups? Should they mutually inform one another?

TG: I think it would be helpful to connect these approaches, and I hope that people will do that to good effect, though in some respects advocacy work and philosophical analysis will obviously differ in their goals.

SL: There have been a number of high-profile news stories recently involving allegations of victimization; in such cases, the testimony of victims is sometimes contradicted by the testimony of alleged perpetrators, with no physical evidence available to corroborate either party’s claims. How should we balance the rights and interests of victims (or purported victims) against the rights and interests of those who are accused?

TG: It is a difficult problem, to be sure.  There are surely temptations in this context.  Given tendencies to dismiss or discredit victims, one might wish to give them full credit in a sort of compensation for benighted attitudes in the past.  Or, given the strong association between innocence and victimhood, one might presume greater credibility for persons claiming to be victims.  While these temptations are understandable, I think they should be resisted. They can be very distorting. Most importantly, they fail to take seriously the rights of accused perpetrators.  The rights of victims and those of accused perpetrators need somehow to be balanced in contexts where credibility is at issue.

SL: One of the more compelling examples you discuss in the book is child soldiers, who may seem to blur the line between victims and perpetrators. Are there cases in which one’s being a victim can excuse one from also being a perpetrator?

Estimates are that there are over 300,000 child soldiers in the world today.  Problems posed are those of  moral and legal responsibility, rehabilitation, and reintegration; these are huge. A child soldier who commits seriously brutal acts is a perpetrator as well as a victim, and this is one of the ethically and politically challenging aspects of the case. Child soldiers are perpetrators in the sense that they are agents who have committed brutal and inhumane acts. They are (typically) victims in the sense that they have become soldiers in coercive circumstances and are not fully responsible for their acts. The perpetrator/victim dichotomy does not serve us well in reflecting on these problems.

TG: Victims deserve respect; they deserve to be heard; they deserve prompt and relevant information about their case; they deserve reparation and compensation. There are aspects of suffering that are unique to victims. Only the victim of a heinous act knows what it is like to experience it.  Having a central role in policy and sentencing is another matter, however.  There are important reasons not to give victims this role.  One is that their experiential knowledge of suffering does not amount to knowledge about sentencing and policy and does not provide it.  Another is that giving a central role to victims through impact statements unintentionally privileges ‘respectable’ and articulate victims, producing imbalances in the administration of justice.

SL: You’ve published on many other topics in social philosophy, including reconciliation, forgiveness, and terrorism. How do you see Victims and Victimhood connecting to those topics?

TG: I have long been interested in issues of peace and reconciliation. To some theorists and practitioners, victims have been of interest primarily for their potential forgiveness, resulting in lack of attention to their serious needs. Victims’ efforts for reparation or compensation may be resisted or ignored, to their lasting detriment. These tendencies were apparent even in the well-regarded Truth and Reconciliation Commission of South Africa. There, victims deserved better.  However, it is important also to recognize that victim advocacy groups can pose challenges to peace settlements. Individuals or groups may seize, righteously and even competitively, on the victim role.  Exploiting presumptions about innocence and victimhood, they may insist on their victimhood with no recognition of their actual or possible status as perpetrators.  Exaggerated deference to victims may result in simplistic judgments concerning the blameworthiness of those identified as perpetrators.