On Truth, from For the Sake of Argument

[The following is an excerpt from Chapter 1 of our forthcoming For the Sake of Argument by Robert Martin. For more information on the book, please visit our website] 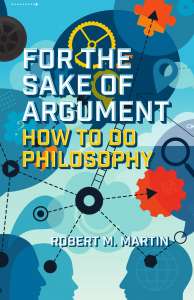 I said this book is about argument. But why argue about philosoph­ical beliefs? It’s a free country; everyone’s entitled to their own opinion, right?

First of all, we should distinguish between two sorts of opinion. One sort has nothing to do with truth.

I don’t mean that these are false. I mean that they’re neither true nor false. It’s stupid to argue about any of these opinions (although, for sure, people disagree about them). You are, of course, entitled to these opinions, and you shouldn’t really care if somebody feels differently. So stop getting mad at those Montréal Canadiens fans.

But other opinions are either true or false. These are opinions that are called beliefs. If you believe that the Franco-Prussian War began in 1875, then you’re right or you’re wrong. (You’re wrong. It was 1870.) If someone has a different opinion, then at least one of you is wrong. If it makes any difference to either of you, then you’ll want to make some efforts to find out what the year really was. All this is entirely out of place, of course, when it’s a matter of ice cream preference.

But does it matter to you whether your belief about that date is true or not? Should it matter? What’s so good about having true beliefs?

One reason is that, by and large, having a true belief about some­thing is better for you—has better effects—than having a false belief, or no belief at all, about it. This is especially clear when it comes to everyday matters. If you believe your plane leaves at 4 p.m. and arrive at the airport in plenty of time for that, but in fact your plane was scheduled for 10 a.m., you’re in trouble. And you’ll also be in trouble if you have no beliefs at all about when your plane leaves (and don’t try to find out).

Sometimes, however, having a true belief is more harmful. For example, imagine that the plane you missed crashed after take-off; your life was saved by your mistaken belief. But the consequences of true beliefs are usually better than those of false ones.

This is now an acceptable technical term in philosophy. I’m not kid­ding. It has been ever since the publication, in 2005, of On Bullshit[1], by the distinguished Princeton philosopher Harry Frankfurt. The book is not a joke either. It’s a serious treatment of what Frankfurt takes to be a growing and dangerous trend: talking and writing with no concern about truth. Bullshitters, then, are different from liars. Liars recognize the difference between truth and falsity, and try to get others to believe what’s false. Bullshitters don’t care what’s true or not, and pay no attention to truth or falsity in what they say. They just make up things, and say them to suit their purposes.

Frankfurt thinks that bullshitting is on the increase. He thinks that part of the blame for this is the increasing number of situa­tions in which people who know nothing at all about a subject are encouraged to give their opinions about it. Several situations like this come to mind. School children, in order not to injure their delicate self-esteem, are nowadays encouraged to express any unfounded opinion they like; they’re praised by the teacher, and their opinions go uncorrected. The Internet provides endless venues for ignorant opinionation. There are loads of “call-in” programs on the radio, where people’s baseless but nevertheless strong views can be broad­cast to a large audience.[2] Frankfurt points at postmodern antireal­ism, a family of views recently infecting the academic humanities, the central idea of which is that there is no such thing as the facts: there’s only what appears to you, coherent with—in fact, generated by—your particular ideological/social/economic/gender position. (I doubt, however, that this movement has had much effect outside the Groves of Academe.)

Several political commentators have remarked on the growing prevalence of bullshit in political campaigning, frequently mentioning Donald Trump’s tendency to say, for effect, whatever he wants, with no concern about whether what he says is true.[3] Compare this with a slightly different phenomenon in political talk: truthiness. This word, coined by American tv satirist Stephen Colbert, refers to an assertion a person makes because it feels right, not because it’s backed by evidence or logic—the truth he wants to exist. Colbert attributed this characteristic to assertions made by George W. Bush. And, of course, both of these are different from Nixon’s flat-out lying.

Frankfurt is upset about the increase in bullshit. He thinks that getting used to saying and hearing bullshit undermines our capacity to care about the truth of what we believe—so it’s more dangerous than lying.

Frankfurt is right to be upset about political bullshit. There are consequences, often very important ones, of what politicians say.

But wait a minute. Let’s be careful here. There are two possibili­ties for interpreting what the Donald says. One is that he’ll just say anything, whether he believes it or not, as long as it has the effect he wants. This is something like lying but not exactly. Another is that he actually believes what he says, but he has failed utterly to take proper care—any care at all, apparently—to assure himself that his beliefs are really true. Both might be counted as bullshit. When we (finally!) get around to thinking about talk and writing in philosophy, we’ll consider both kinds of philosophy bullshit.

[3] See, for example Jeet Heer’s application of Frankfurt’s ideas in “Donald Trump Is Not a Liar,” New Republic, 1 December 2015.