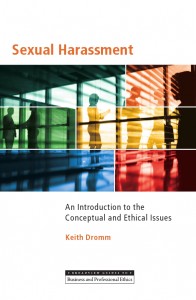 Keith Dromm, Associate Professor of Philosophy at Louisiana Scholars’ College at Northwestern University and author of the recently published Sexual Harassment: An Introduction to the Conceptual and Ethical Issues, sat down with Alex Sager, Acquiring Editor for the Broadview Guides to Business and Professional Ethics series, to answer a few questions on the corporate, legal, and philosophical issues surrounding sexual harassment.

1. The title of your book is Sexual Harassment: An Introduction to the Conceptual and Ethical Issues. What makes sexual harassment a conceptual issue?

Descriptive definitions simply record how the term is typically used in society. Though they are influenced by law, they often differ from legal definitions in important respects. For example, many people would consider it sexual harassment to yell sexually suggestive comments to passing strangers even if it might not legally constitute sexual harassment.

It is important to recognize, both conceptually and legally, how sexual harassment can be a form of discrimination. However, workers have the right to be protected from other forms of sexual harassment. I discuss in my book various alternative legal approaches but do not come out strongly in favor of any one of them. They all involve separating sexual harassment law from anti-discrimination law, although without necessarily abandoning the latter. We still need laws to protect us from discrimination. Protection from other forms of sexual harassment might not need new laws directed specifically at them. Laws that grant greater overall protection to workers might be sufficient. For example, in the United States, the employment relationship is governed by the at-will doctrine, which allows employees to be fired without just cause. I endorse the view of many legal scholars and others that the at-will doctrine weakens the power of workers, including making them less able to resist sexual harassment. Abandoning or relaxing the doctrine would grant greater protection to workers against all forms of harassment.

It is also important to recognize that the law is not an effective or otherwise appropriate remedy for all forms of sexual harassment. It also cannot provide a complete solution to sexual harassment. Sexual harassment is caused by beliefs about the worth and dignity of individuals and groups of people that cannot be modified by the law alone. Deeper cultural changes are required to change these beliefs. One of these changes, of course, is affording equal opportunities to women in our workplaces and schools by eliminating discrimination.

I’d like to see some research that attempts to explain the negative attitude employees have towards sexual harassment training, but I suspect that many simply find it insulting. Training of any sort implies some sort of deficiency, but there are some deficiencies we’re more willing to admit to than others. If a company implements new software or machinery, most employees would willingly admit their ignorance about it and gladly accept training to help them use it. Training in sexual harassment, however, implies that a person’s social skills need to be improved. Most people are reluctant to admit to this and would understandably resist training on how to behave better towards others (even though many of these people might need this sort of training). More effective training would attempt to deemphasize, if not eliminate, this implication. One way to do this would be to make the training interactive. Rather than being “lectured to” by speakers or videos about how to treat others, the training could involve soliciting from employees their ideas about how to reduce sexual harassment in the workplace. It would draw on the employees’ own expertise on how to treat others, rather than presupposing that they need some training in this. Some of the ideas generated in these sessions could even be incorporated into the workplace’s sexual harassment policy. Research has shown that interactive training is more likely to change positively the behavior and attitudes of trainees. It can also improve employees’ attitudes towards training by getting rid of the implication that their interpersonal skills need to be improved. To go along with this, it would probably be helpful if the word “training” were dropped and replaced with something like “workshop.”

Schultz believes that sexual harassment law could be used by employers as an excuse to more tightly control employees’ behavior. She is concerned particularly about prohibitions on romantic or sexual relationships between employees or the use of so-called “love contracts” that require workers to acknowledge their consent before entering such relationships. While the ostensible goal of such policies is the prevention of sexual harassment, they inhibit the development of both sexual and non-sexual consensual relationships between employees. Given the amount of time that employees spend at work, the workplace is for many of them a primary source of social relationships. So, these policies will have deleterious consequences on their social lives. These are legitimate concerns. Schultz correctly observes that it impossible to eradicate sexuality entirely from the workplace and the result of policies that control employees’ interpersonal relationships will only be increased surveillance of workers’ behavior. The workers might also develop a negative attitude generally towards efforts to combat sexual harassment because of policies like these. Nevertheless, there remains a need for sexual harassment policies in workplaces. When properly designed, they can protect both employers and employees. The policies need to be targeted towards the behaviors that can constitute sexual harassment and the relationships in which it can occur. Policies that prohibit or tightly regulate all sexual or romantic relationships in a workplace are overkill and will have those negative consequences about which Schultz warns.

5. Much of your teaching and writing explores topics in popular culture—in fact, your earlier published work on sexual harassment appeared in The Office and Philosophy. You’ve also contributed articles to a number of collections on philosophy and popular topics such as the television show The X-Files, the film Inception, and the films of Steven Spielberg. What led you to regularly contribute to books aimed at the general reader?

Philosophy books aimed at the general reader are valuable. They can introduce a wider audience to philosophy than more academic books, which is important since there are decreasing opportunities to study philosophy in schools. Such books are also capable of demonstrating the relevance of philosophy. They can show that philosophy has something to say even about, for example, popular culture, as well as the problems—sometimes fantastical, but also often ordinary—that are the subjects of popular culture (my book includes an appendix of popular films and television shows that deal with sexual harassment).

I have the same aspirations for my book. It is written for a general audience. But like the books I’ve contributed to, its purpose is not to instruct readers about philosophy. Instead, it uses philosophy to help clarify and in other ways illuminate its topic. It hopefully demonstrates how philosophy can be used to increase our understanding of sexual harassment, and how this understanding is essential to our efforts to reduce it.

Keith Dromm is Associate Professor of Philosophy at Louisiana Scholars’ College at Northwestern State University. He is the author of Sexual Harassment: An Introduction to the Conceptual and Ethical Issues (Broadview, 2012).