Interview with H.E. Baber on Globalization 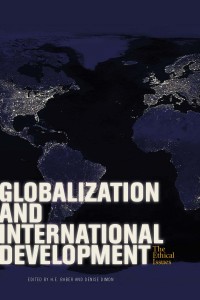 In anticipation of the publication of Globalization and International Development, we spoke with co-editor (along with Denise Dimon) H.E. Baber to get her thoughts on the ethical and economic issues surrounding globalization and the ways in which this new anthology brings those issues to light.

1. One of the distinctive features of your book is that it includes readings from people working in a variety of disciplines. Do you think that some of the problems we see in international development are exacerbated by a lack of conversation between philosophers, economists, and other social theorists?

And how! The typical “contemporary moral issues” reader, designed for use in undergraduate applied ethics courses, is very short on empirical data from economics and other social sciences. This isn’t too bad when it comes to disputed questions where the empirical facts are relatively straightforward and uncontroversial. The paradigm case is abortion. There is no disagreement about the biological facts of fetal development. The questions are purely ethical and metaphysical: what is personhood, as distinct from species membership? What does it take to have a serious right to life? Can we make sense of the notion of “potentiality” that figures in the debate? These are questions philosophers like—we can discuss them at length and even niggle a little bit about double-effect for fun.

But when it comes to ethical questions concerning the issues considered in our book, which pose questions concerning social policy, political agendas, and strategies for economic development, the empirical facts of the matter are vital. To carry on any productive discussion, we need to consider not only the data, but also the analyses of economists and other social scientists, as well as their projections of the likely consequences of various actions and policies.

2. The readings in your book represent positions that are often quite radically opposed to one another. Do you believe that there’s sufficient common ground, either in moral beliefs or in empirical facts, for rational resolution to disagreements between proponents of severely opposed political and economic positions?

My bet is that when it comes to most of the issues considered in our book there’s substantial agreement about many of the fundamental moral issues.

We all agree that women and ethnic minorities should have the wherewithal to participate economically and politically in their communities. We all agree that war is an evil, even if it may be a necessary one. We all agree that it is bad that a great many people live in absolute poverty and that many die prematurely of preventable diseases. But that is just the beginning of the discussion. We disagree about which policies would be most effective in promoting these goals and which interventions are morally acceptable.

Arguably much of what passes for moral disagreement is really disagreement about empirical facts. There are, of course, the “hard questions” in ethics, which no amount of empirical data or analysis can illuminate. We can obsess endlessly about abortion and euthanasia, about whether as-yet non-existent future generations have rights and whether it would be morally acceptable to switch a trolley to run over one person rather than five. But there are also questions that, even if not easy, are amenable to empirical investigation, which we address in this volume.

“Just the facts, ma’am” is certainly not an adequate response to these issues, so we of course include both discussions of ethical theory and essays in applied ethics. But even if the facts and analyses by social scientists are not sufficient for an informed discussion, they are necessary. And we provide those facts and analyses, along with a bibliography for further investigation.

3. Some say that globalization can help to equalize the playing field between wealthy and impoverished nations. Yet, with some exceptions, the dividing lines between the Global North and South seem to have remained relatively stable for decades. Do you think this is changing? Does globalization have the potential to increase international economic equality?

Here we must respond with the philosophers’ fudge: it depends on what you mean by “globalization.” If you mean the Washington Consensus, understood as market fundamentalism with an attendant suite of neoliberal policies, certainly not. A number of economists, including John Williamson, who coined the term “Washington Consensus,” repudiate this agenda. But globalization in the non-ideological sense—improved worldwide transportation and communication, cosmopolitanism and, as a consequence, urbanization—is, arguably, on balance a benefit.

4. In recent years, many North Americans have become increasingly aware of the unequal distribution of wealth in their own countries, especially in light of the 2008 financial crisis and the efforts of the Occupy Movement. Are there connections, economic or philosophical, between this domestic disparity and global wealth disparity?

When we look at the US we see an affluent country rushing headlong to join the Global South. Among developed nations, the US has one of the highest rates of economic inequality and lowest rates of social mobility. The policies that support this state of affairs are promoted by a plurality of voters who believe that they are already living in the Global South—Americans who believe that government is irredeemably corrupt and that their taxes are nothing more than tribute to self-serving bureaucrats. Living in one of the richest nations on earth, they imagine that they are living on the edge of destitution and can’t afford to make a decent life for their fellow citizens—that the US cannot afford universal health care or education or the social safety nets that are taken for granted in other affluent countries. Middle Americans imagine they’re living in a failed state, in circumstances where violence is endemic, so that they need firearms to protect themselves and their families. They imagine that government is irremediably corrupt so that they must rely on religious institutions and secular charities to rescue the increasing number of fellow Americans who fall through the cracks. And this is all false.

Remarkably, we Americans countenance programs in our conquered territories that we reject for our own citizens. We deplore the oppression of women in the Global South and the treatment of ethnic minorities. But in the US we resist efforts to improve the lot of women and minorities. We support programs intended to promote economic equality abroad, but in the US we promote a system that locks in privilege, undermines opportunity, and perpetuates economic inequality.

5. What effect do you hope your book will have on its readers?

We hope that readers will become more reflective about the allocation of resources both domestically and abroad.

Globally, as a species, we humans are now rich beyond the wildest dreams of our ancestors and have technology they could never have imagined. But we have never been more niggardly in sharing these resources, or more fearful. In large part this is because we have got the facts wrong. So, for example, Americans on the average assume that the US spends roughly 25% of its budget on foreign aid, when the true figure, which includes military support for Israel and Egypt as part of the Camp David accords, is less than 1%. Most Americans, however, think we should “slash” foreign aid to 10%.[1] We see ourselves as saviours of the world, sacrificing a quarter of our wealth to benefit the global down and out, when in fact our expenditure on foreign aid is negligible—and the bulk of that goes to providing arms to Israel and friendly third-world regimes.

It may be that when all the facts are in, our readers will decide to support business as usual. Notoriously you can’t deduce ought from is. But we hope to provide the data, the economic analysis, and the philosophical tools to support instructors and to inform students.

H.E. Baber is Professor of Philosophy at the University of San Diego and author of The Multicultural Mystique: The Liberal Case against Diversity.