Where is this island? 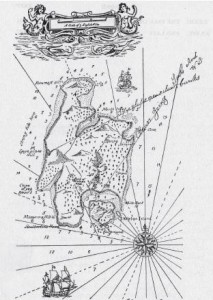 In a recent article in The Times Literary Supplement John Sutherland discusses the complex composition history of Robert Louis Stevenson’s Treasure Island, in particular why “the line between ‘influence’ and ‘plagiarism’ is never easy to trace.”

In the recently published Broadview Edition of this classic adventure story, Sutherland expands on his discussion of Stevenson’s “plundering” of other writers; he also touches on the author’s writer’s block, and the surprisingly disturbing and complex nature of what was meant to be a children’s story.

The following excerpt from the introduction to Sutherland’s edition of Treasure Island cheekily inquires into the geographic whereabouts of the island:

The map is very informative about the geography of Treasure Island, but it is frustratingly uninformative about where the Island itself is, geographically. Jim, as he coyly says in the first paragraph, has been explicitly forbidden from divulging the island’s exact bearings. As the map records, it is Jim who has struck those bearings out.

Denied a precise location, the reader will assume Treasure Island to be somewhere in the Spanish Main. Silver and his crew are, after all, “Pirates of the Caribbean.” And a whole array of passing references supports this. One may list them:

1. The stress, throughout the narrative, on “rum”—the staple drink of the West Indies.
2. The similar stress on “buccaneers” (see p. 37, n. 2).
3. The name Hispaniola (see p. 80, n. 2).
4. A string of references in Silver’s recollection of his, and his parrot’s, grisly careers in the Caribbean (see p. 98, n. 1).
5. Similar references in Billy Bones’s recollections (see p. 94, n. 1).
6. The fact that the Walrus’s crew end up beached in Savannah (or, in Young Folks, Key West)—both alongside the Gulf of Mexico.
7. The fact that when the Hispaniola makes its return voyage it first touches port where it is “immediately surrounded by shore boats full of negroes, and Mexican Indians, and half bloods” (p. 222). Havana, one assumes.

All these combine to form an overwhelming impression. How then do we explain the rattlesnake that welcomes Jim ashore in Chapter 14 (p. 117)? Or the luxuriant stands of live oaks? Or—most identifyingly—what Jim sees in Chapter 24 (“The Cruise of the Coracle”):

Crawling together on flat tables of rock, or letting themselves drop into the sea with loud reports, I beheld huge slimy monsters—soft snails as it were, of incredible bigness—two or three score of them together, making the rocks to echo with their barkings. I have understood since that they were sea lions.

These are the famous sea lions that Stevenson himself admired on his visit to the Monterey peninsula, off the misty coast of northern California, a couple of years earlier. One would be as likely to see a polar bear as a sea lion on an island in the Spanish Main. No more would one see a Pacific Coast rattler there, or the American West’s distinctive live oaks. Treasure Island, then, would seem to lie off both the east and west coasts of North America. Stevenson assumed—with some justification—that “young folks” did not much worry their young heads about such geographical niceties. He admitted in a letter of May 1884 that the island’s setting was “in part Californian and in part chic.” The concoction, much as it may offend geographers, works well.