The “Umbrella-Philosopher” According to R.L. Stevenson 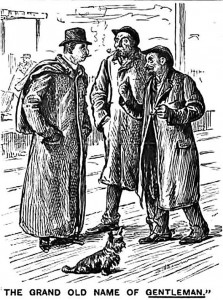 From Robert Louis Stevenson, “The Philosophy of Umbrellas”
(210). Appendix L “The Victorian Gentleman: Body and Clothing” of the Broadview Edition.

More information on our new edition of Strange Case of Dr Jekyll and Mr Hyde – Third Edition can be found here.

Any one acquainted with the growth of Society, and knowing out of what small seeds of cause are produced great revolutions, and wholly new conditions of intercourse, sees from this simple thought how the carriage of an umbrella came to indicate frugality, judicious regard for bodily welfare, and scorn for mere outward adornment, and, in one word, all those homely and solid virtues implied in the term RESPECTABILITY. Not that the umbrella’s costliness has nothing to do with its great influence. Its possession, besides symbolising (as we have already indicated) the change from wild Esau to plain Jacob dwelling in tents,[1] implies a certain comfortable provision of fortune. It is not every one that can expose twenty-six shillings’ worth of property to so many chances of loss and theft. So strongly do we feel on this point, indeed, that we are almost inclined to consider all who possess really well-conditioned umbrellas as worthy of the Franchise. They have a qualification standing in their lobbies; they carry a sufficient stake in the common-weal below their arm. One who bears with him an umbrella—such a complicated structure of whalebone, of silk, and of cane, that it becomes a very microcosm of modern industry—is necessarily a man of peace. A half-crown cane may be applied to an offender’s head on a very moderate provocation; but a six-and-twenty shilling silk is a possession too precious to be adventured in the shock of war.

These are but a few glances at how umbrellas (in the general) came to their present high estate. But the true Umbrella-Philosopher meets with far stranger applications as he goes about the streets.

Umbrellas, like faces, acquire a certain sympathy with the individual who carries them: indeed, they are far more capable of betraying his trust; for whereas a face is given to us so far ready made, and all our power over it is in frowning, and laughing, and grimacing, during the first three or four decades of life, each umbrella is selected from a whole shopful, as being most consonant to the purchaser’s disposition. An undoubted power of diagnosis rests with the practised Umbrella-Philosopher. O you who lisp, and amble, and change the fashion of your countenances—you who conceal all these, how little do you think that you left a proof of your weakness in our umbrella-stand—that even now, as you shake out the folds to meet the thickening snow, we read in its ivory handle the outward and visible sign of your snobbery, or from the exposed gingham of its cover detect, through coat and waistcoat, the hidden hypocrisy of the ‘DICKEY’![2] But alas! even the umbrella is no certain criterion. The falsity and the folly of the human race have degraded that graceful symbol to the ends of dishonesty; and while some umbrellas, from carelessness in selection, are not strikingly characteristic (for it is only in what a man loves that he displays his real nature), others, from certain prudential motives, are chosen directly opposite to the person’s disposition. A mendacious umbrella is a sign of great moral degradation. Hypocrisy naturally shelters itself below a silk; while the fast youth goes to visit his religious friends armed with the decent and reputable gingham. May it not be said of the bearers of these inappropriate umbrellas that they go about the streets ‘with a lie in their right hand’?[3] […]

[1] In the Book of Genesis Jacob is forced to live in the wild when his brother Esau takes over his tents and livestock.

[2] A false, short shirt-front that looks like a full shirt but is made of cardboard or celluloid.

[3] Isaiah 44:20: “He feedeth on ashes: a deceived heart hath turned him aside, that he cannot deliver his soul, nor say, ‘Is there not a lie in my right hand?’”