Broadview recently released a third edition of The Broadview Anthology of British Literature Volume 2: The Renaissance and the Early Seventeenth Century. As with all new editions of our anthology, the third edition of Volume 2 features exciting new material. In this entry of the Broadview Blog, we present a sample of this material: two excerpts from The Wonderful Year, Thomas Dekker’s pamphlet chronicling the plague that struck London in the year of Elizabeth I’s death. A comprehensive list of additions to the anthology—and to its companion website “BABL Online”—also appears below. More information about The Broadview Anthology of British Literature is available here.

From Dekker’s The Wonderful Year, on the plague in the city and the country:

In this pitiful (or rather pitiless) perplexity stood London, forsaken like a lover, forlorn like a widow, and disarmed of all comfort: disarmed I may well say, for five rapiers[1] were not stirring all this time, and those that were worn, had never been seen, if any money could have been lent upon them, so hungry is the ostrich[2] disease, that it will devour even iron: let us therefore with bag & baggage march away from this dangerous sore city, and visit those that are fled into the country. But alas! … you are peppered[3] if you visit them, for they are visited already: the broad arrow of death, flies there up & down, as swiftly as it does here: they that rode on the lustiest geldings,[4] could not out-gallop the Plague. It overtook them, and overturned them too, horse and foot.

You whom the arrows of pestilence have reached at eighteen and twenty score … you that sickening in the highway, would have been glad of a bed in an hospital, and dying in the open fields, have been buried like dogs, how much better had it been for you, to have lain fuller of boils and plague sores than ever did Job,[5] so you might in that extremity have received both bodily & spiritual comfort, which there was denied you? For those misbelieving pagans, the plough-drivers, those worse than infidels, that (like their swine) never look up so high as Heaven: when citizens boarded them[6] they wrung their hands, and wished rather they had fallen into the hands of Spaniards: for the sight of a flat-cap was more dreadful to a lob, then the discharging of a caliver[7].…

Illustration from Thomas Dekker, A Rod for Runaways, 1625: 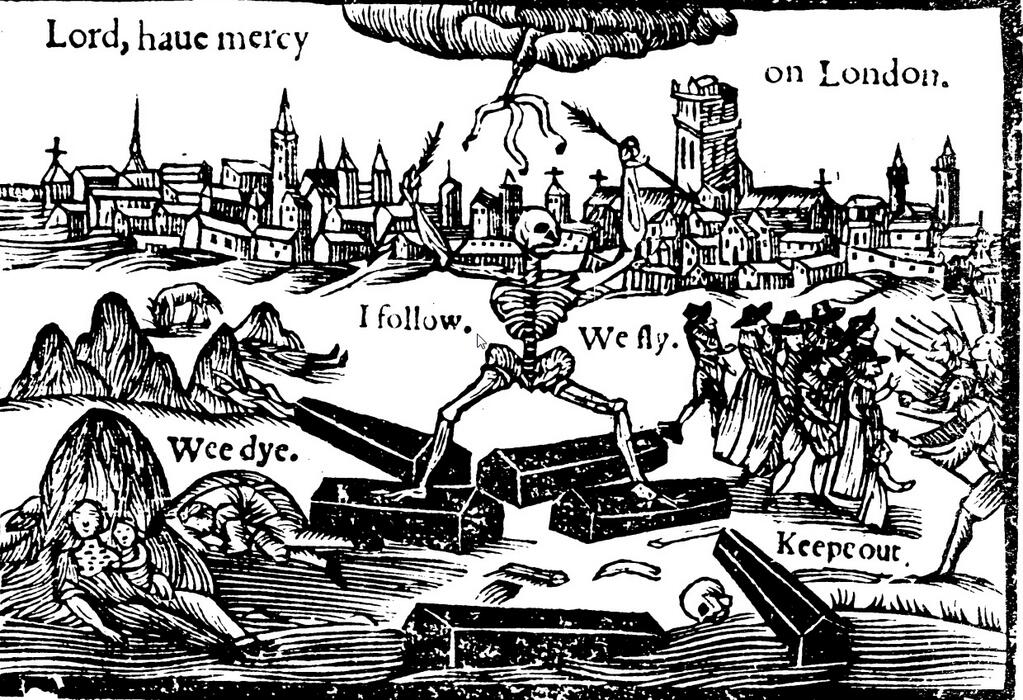 From The Wonderful Year, the story of an inebriated man’s adventure:

About twelve of the clock at midnight, when spirits walk, and not a mouse dare stir, because cats go a caterwauling:[8] Sin, that all day dares not show his head, came reeling out of an alehouse, in the shape of a drunkard, who no sooner smelled the wind, but he thought the ground under him danced the Canaries:[9] houses seemed to turn on the toe, and all things went round: insomuch, that his legges drew a pair of indentures,[10] between his body and the earth, the principal covenant being that he for his part would stand to nothing whatever he saw: every tree that came in his way, did he jostle, and yet challenged it the next day to fight with him. If he had clipped but a quarter so much of the King’s silver, as he did of the King’s English,[11] his carcass had long before this been carrion for crows. But he lived by gaming, and had excellent casting,[12] yet seldom won, for he drew reasonable good hands, but had very bad feet, that were not able to carry it away. This setter-up of malt-men,[13] being troubled with the staggers, fell into the self-same grave, that stood gaping wide open for a breakfast next morning, and imagining (when he was in) that he had stumbled into his own house, and that all his bedfellows (as they were indeed) were in their dead sleep, he, (never complaining of cold, nor calling for more sheets) soundly takes a nap till he snores again: in the morning the sexton comes plodding along, and casting upon his fingers ends what he hopes the dead pay of that day will come too, by that which he received the day before, (for sextons now had better doings than either taverns or bawdy-houses): in that silver contemplation, shrugging his shoulders together, he steps ere he be aware on the brims of that pit, into which this worshipper of Bacchus[14] was fallen, where finding some dead men’s bones, and a skull or two, that lay scattered here and there; before he looked into this coffer of worms, those he takes up, and flings them in: one of the skulls battered the sconce[15] of the sleeper, while the bones played with his nose; whose blows waking his musty worship, the first word that he cast up, was an oath, and thinking the cans had flown about, cried zounds,[16] what do you mean to crack my mazer?[17] The sexton smelling a voice, (fear being stronger than his heart) believed verily some of the corpses spoke to him, upon which, feeling himself in a cold sweat, took his heels, while the goblin scrambled up and ran after him: but it appears the sexton had the lighter foot, for he ran so fast, that he ran out of his wits, which being left behind him, he had like to have died presently after.

List of changes in the third edition of The Broadview Anthology of British Literature Volume 2: The Renaissance and the Early Seventeenth Century:

Footnotes from the Dekker excerpts:

[1] rapiers  Long, thin swords.
[2] ostrich  Having the fabled behaviors of ostriches, which include a willingness to eat almost anything, especially hard objects.
[3] peppered  Pelted with shot, or infected with a disease that gives its victims spotted sores (like syphilis or plague).
[4] lustiest geldings  Most vigorous castrated male horses.
[5] Job  Eponymous protagonist of the Old Testament book of Job, who was struck by God with extreme poverty, disease, and destitution, to be later saved and restored for his faith and patience.
[6] boarded them  Provided them with lodging and food.
[7] flat-cap  Cap worn by citizens of London;  lob  Lout or country bumpkin;  caliver  Light sort of musket.
[8] caterwauling  Shrieking and wailing while in heat.
[9] the Canaries  Il Canario, a vibrant Spanish dance style supposedly based on a dance performed by the aboriginals of the Canary Islands.
[10] legges  Legs, with a possible pun on “lieges”;  pair of indentures  Identical contracts, which were produced in pairs so that both parties could keep one.
[11] If he … English  A pun on the word “clip,” meaning “to slur one’s speech,” and the practice of coin clipping, shaving precious metals from the edges of coins to make a profit—a crime that was punishable by execution.
[12] casting  Counting; in this usage, of cards.
[13] malt-men  Makers of malt (in this case, clearly, malt for beer).
[14] Bacchus  Roman god of wine.
[15] sconce  Head.
[16] zounds  An abbreviation of the oath “by God’s wounds.”
[17] mazer  Humorous word for head.