The Linotype and the Mechanization of Typesetting 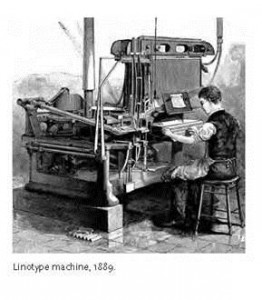 The invention of the typewriter in the 1860s spurred a fervent interest in speed, legibility, and precision among writers and publishers alike. As individual writers experienced the various advantages of typescript over a handwritten manuscript, printing houses began looking for ways to replicate the efficiency of the keyboard in large-scale printing practices. An increasingly mechanical age called for systems of production that could turn out a high quantity of high-quality books with minimal physical effort.

Early experimentation with keyboard-driven typesetting involved releasing cast type from large font storage bins into “composing sticks,” which would make the impression and then release the type. Type produced this way was often inaccurately aligned, and this method still required the labour-intensive process of collecting and sorting type once a printing job was complete. These problems were solved with the development of “hot metal composing.” A keyboard was used to produce letters one at a time throughout the typesetting process; when a particular key was selected, a brand new piece of type would be cast and sent into the composing stick, thereby creating new type and fresh impressions for each new project. This process of hot metal composing was the concept behind the first commercially successful typesetting machine: the Linotype, invented by Ottmar Mergenthaler in 1886.

To read more on the Linotype and on early typesetting procedures, see Chapter Three: The Printing Revolution, in Solveig Robinson’s The Book in Society.