R. v. Machekequonabe – From Canadian Cases in the Philosophy of Law 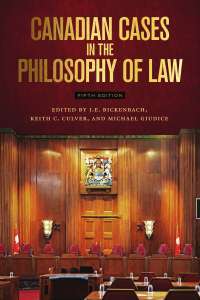 What follows is a case from the fifth edition of Canadian Cases in the Philosophy of Law. This new edition includes many contemporary and historical cases, making it easy for students to compare historical court decisions such as the below to those from the present day.

In this criminal case, an old one by Canadian standards, the problem of bridging a cultural gap was at issue, although it was clearly not given much consideration by the Court. A “pagan Indian” (his nation or tribe is never mentioned) was charged with manslaughter for killing what, from his cultural and religious perspective, was a dangerous evil spirit, a Wendigo. The question here is (obviously) not whether Wendigos exist or not, but whether a person’s sincere belief that they exist, are dangerous to the group and must be killed, should figure in some way into our assessment of the “guilty mind” or mens rea. (In the style of the day, the argument of the defence counsel is presented after the facts have been set out and before the court’s actual judgement, which is starkly brief.)

It appeared from the evidence that the prisoner was a member of a tribe of pagan Indians who believed in the existence of an evil spirit clothed in human flesh, or in human form, called a Wendigo which would eat a human being.

That it was reported that a Wendigo had been seen and it was supposed was in the neighbourhood of their camp desiring to do them harm. That among other precautions to protect themselves, guards and sentries, the prisoner being one, were placed out in pairs armed with firearms (the prisoner having a rifle); that the prisoner saw what appeared to be a tall human being running in the distance, which he supposed was the Wendigo; that he and another Indian gave chase, and after challenging three times and receiving no answer fired and shot the object, when it was discovered to be his own foster father, who died soon afterward.

The jury found affirmative answers to the following questions:
Are you satisfied the prisoner did kill the Indian?
Did the prisoner believe the object he shot at to be a Wendigo or spirit?
Did he believe the spirit to be embodied in human flesh?
Was it the prisoner’s belief that the Wendigo could be killed by a bullet shot from a rifle?
Was the prisoner sane apart from the delusion or belief in the existence of a Wendigo?

The learned trial Judge then proceeded with his charge as follows: “Assuming these facts to be found by you, I think I must direct you as a matter of law that there is no justification in manslaughter so that unless you can suggest to yourselves something stated in the evidence, or drawn from the evidence to warrant a different conclusion, I think it will be your duty to return a verdict of manslaughter. You may confer among yourselves if you please, and if you take that view, I will reserve a case for consideration by the Court of Appeal as to whether he was properly convicted upon this evidence.”

This case was argued on February 8th, 1897, before a Divisional Court composed of Armour, C.J., and Falconbridge, and Street, JJ.

J.K. Kerr, Q.C., for the prisoner. The evidence shews the Indian tribe were pagans, and believed in an evil spirit clothed in human form which they called a Wendigo, and which attacked, killed and ate human beings. The man that was shot was thought to be a Wendigo, a spirit as distinguished from a human being. It is true there was a mistake, but there was no intention even to harm a human being much less to kill. The evidence shews the mistake was not unreasonable. At common law the following of a religious belief would be an excuse. The trial Judge wrongly directed the jury to find the prisoner guilty. There should be a new trial at least. [. . .]

The judgement of the Court was delivered by Armour, C.J.:

Upon the case reserved if there was evidence upon which the jury could find the prisoner guilty of manslaughter it is not open to us to reverse that finding, and the question we have to decide is whether there was such evidence. We think there was, and therefore do not see how we can say that the prisoner was not properly convicted of manslaughter.