Quest of the Holy Grail and Medieval Manuscripts

[Judith Shoaf, editor of our new edition of Quest of the Holy Grail, shares some tips from her experience finding medieval manuscripts online and incorporating images into her new Broadview Edition.]

In researching this translation of the Old French Quest of the Holy Grail, I had the luxury of being able to consult, from the comfort of home, images of every page of many manuscripts which preserve not only the text but a variety of illuminations suggesting what the artists—and those who paid them—thought of the adventures of Galahad, Lancelot, Perceval, and Bors. I was delighted that Broadview agreed to include a number of my favorites in the new book; most of these are from a few manuscripts in the Bibliothèque Nationale de France (BNF), which was indeed my richest source for online material. The one I used most often was BNF MS FR (= manuscripts in the French language) 343, produced in Milan in the late 14th century; its delicate drawing and hint of perspective are appealing even to the modern eye. This manuscript can be browsed online at https://gallica.bnf.fr/ark:/12148/btv1b84584343/f1.planchecontact.

I am taking advantage of this blog to offer instructors and students some tools for compiling their own “illustrated” Quest of the Holy Grail, along the lines of Siân Echard’s painstaking work.

Pictures in the Quest manuscripts

What images can you expect to find in these manuscripts? One strong impression I have is that an artist qualified to illustrate chivalric romances if he or she could draw a horse (cheval in French), a man on a horse (chevalier) and two or more men on horseback engaged in some deed of chivalry (chevalerie). To determine which particular episode of chivalry is being depicted, I have to refer to the text itself, since two knights fighting, or even a knight riding up to a castle/monastery, are recurring scenes in the Quest (as in most medieval romances). The most helpful bit of heraldry is that Galahad’s shield is described in the text as white with a red cross, so he is always identifiable, as in Bodley MS Douce 215 f39v, where he and Perceval watch a castle falling apart. One unusual chivalric scene that a few illustrators include is the scene of Lionel killing a hermit who has fallen on Bors’s body to protect him: BN MS ARS 3480 p. 559.

Other common themes that all the artists know how to convey is a woman speaking to a man or men, and a king on his throne holding court in a stylized palace. These may be combined in an illustration at the very beginning of the Quest, in which a stranger, a woman, comes to Arthur’s court looking for Lancelot. A charming example is from BNF MS Fr 342 f58v, accessible through the Mandragore database. Sometimes this first illustration has a “comic strip” format, showing the lady at court, Lancelot knighting Galahad, and a few other episodes from the first chapter; a nice example is BN MS FR 111 f236r.

There are certain items peculiar to the Quest which demand a lot of the artists. One of these is the Round Table. The Quest specifies a circular table seating 150 knights, which cannot be illustrated effectively. British Library (BL) Royal MS 14.e.iii f90r, is one of many which show Galahad and the others seated at a rectangular table. Others try for a round table seating half a dozen or a dozen knights, e.g. BNF MS FR 112 f5r. or the lively full-page image from Cologny Bodmer MS 105 d. The variety is a reminder that the illustrators were not necessarily literate and may not have felt bound to depict objects or persons exactly as described in the text.

Another distinctive object is, of course, the Grail itself. In the Cycle romances, its description varies; all one can say is that it is convex (blood drips into it, you can look into it, and in one instance Jesus himself emerges from it). The artistic tradition seems mostly to have agreed to show a covered, footed dish, of the form of a ciborium (the covered container for blessed Eucharistic hosts). It often appears in a scene where Lancelot falls into a kind of trance when the Grail heals another knight.

Later in the same manuscript, the Grail knights kneel before a more elaborate depiction of the vessel, on f179v. Another scene where the Grail may be depicted is when it is carried into the city of Sarras on its silver table, as in BNF MS FR 116 f672r; but BNF MS Fr 112 f181r gives us the same scene without the Grail. I found only one image that reflects the text of the Grail Mass near the end of the Quest, with twelve knights assembled, Bishop Josephus attended by angels, and Jesus emerging from the Grail, and that is BN Ars 5218 f88r. A very different image, from a manuscript in Udine, Italy, shows Josephus being carried towards the Grail table by angels, as in the text, but shows the Grail itself as a large double-handled ewer: Udine Bibl. Arcivescovile 177 (the upper of two pictures shown; click to enlarge).

In my Appendix C1, I presented the account of the first Mass, celebrated in the original Grail ark before the year 100, from History of the Holy Grail (the “prequel” to the Quest). In this sequence, the dish which Joseph of Arimathea has kept as a relic of Jesus becomes the vessel of the first Mass, performed with divine instruction by his son Josephus.

A third specialty of Quest illustrators would be the depiction of ships. The story has no fewer than four ships (the ship built by Solomon, a heavenly ship, a diabolical ship, and a ship built by the Grail knights to hold the embalmed corpse of Perceval’s sister). I have not found many illustrations of the diabolical ship in which the devil, disguised as a beautiful lady, arrives to tempt Perceval, but the artist of BN MS FR 343 tackles the episode with brio on f. 64, and also depicts the saintly ship with its wise advisor a few pages later. Here is another version of the “good” ship: Beinecke MS 279 f. 217v. The Ship of Solomon is tackled by most illuminators

The last two of these depict the entire scene within the letter “O” of the word “Or,” meaning “Now,” which begins many chapters of the Quest

The ship in which Perceval’s sister’s dead body travels appears in various images, perhaps because Lancelot himself travels in it for quite a while. Here he is praying in the boat: Bodley MS Rawl Q6 f355v. Here the girl’s body is visible as Lancelot is about to disembark at the Grail Castle in BNF MS FR 111 f265v. Earlier, in this ship, Lancelot and Galahad met for the first time in full recognition of their father-son relationship, as here in the Dijon manuscript, or in this similarly late image from BNF MS FR 112 f175r. Here is a touching depiction of the two men parting, six months later, for the last time, in BNF Fr fol. 667r; however, in BL Royal MS 14.e.ii, the same moment is unemotional.

How to find medieval manuscripts online

My online explorations began with Alison Stones’s list of manuscripts currently held in various libraries at the University of Pittsburgh’s Lancelot-Grail Project. This includes manuscripts of the various parts of the Lancelot-Grail Cycle, of which the Quest is the penultimate section; the list provides context for the romance—did its audience think of it as Part 1 of 2 (as we often do now, since the last two sections are the ones most often read), 2 of 3, or 6 of 7? The list also notes the number of illustrations in each manuscript—and the ones with illustrations are more likely to have been photographed in color for online viewers. 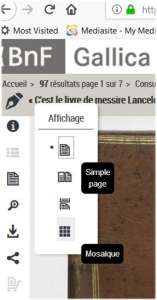 The next stop is the online collections of various libraries which own manuscripts. Some of them only have one or two images online, while others have photographed every page at high resolution, so that I can read the text better, I think, than if I had it in front of me. Some have tried out several tools so that illuminations from a collection can be found on different sites. The richest online source by far is the Gallica collection, which includes a vast number of public-domain works held in French libraries. Unfortunately, the indexers of the collections have, over the years, labeled and relabeled manuscripts, so that a variety of titles, authors, and numbers appear. That’s why the Lancelot Project list is helpful: it provides manuscript numbers and contents lists that can help locate a particular book.

So: step one, go to https://gallica.bnf.fr/accueil; step two (or maybe two and three), “rechercher” a French keyword, such as “Graal,” in the category of “manuscrits”; then perhaps try to narrow the 97 hits down by century and by adding the manuscript number or other extra terms. Or just start browsing the choices, looking for color thumbnails (since many of these books are presented in both a color and a black-and-white version). A useful icon on the left menu is a little page, which can be opened to choose one-page or two-page display, or thumbnails of every page, set out in rows, so that you can look for illuminations, and open only those pages.

Note: a big monitor helps. Other websites have similar tools (some way to browse thumbnails, zoom options) but they are not standardized.

Note 2: Generally manuscripts are named by the library where they are held, a collection in that library, a manuscript number, and a folio number (that is, the sheet with both sides, r for the front and v for the back) or a page number.