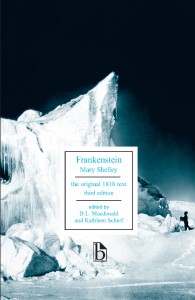 This fall at Broadview we are trying something new and exciting with three of our best-loved Broadview Editions—Frankenstein, Heart of Darkness, and The Strange Case of Dr. Jekyll and Mr. Hyde: we are publishing extensive websites focused on critical approaches to each text. These Online Critical Editions will include a dozen or more articles offering recent criticism on the text, a set of foundational theory articles, a bank of images relating to the text, and a glossary providing brief overviews of common approaches to literary theory and criticism.

The academics who have taken a look at these critical editions clearly share our enthusiasm. “An invaluable resource,” says Anne Mellor of the Frankenstein site. “I love this website,” says Jenifer Mohammed of the University of Manitoba of the same site, while David Sandner of Cal State Fullerton praises it as “a resource that’s easy for students to navigate, while drawing them ever deeper into an intellectual engagement with the text.”

These Online Critical Editions are of course something of a departure from past editorial practices at Broadview. Our approach to publishing editions of literary and other texts has been clearly defined and very distinctive ever since the D.L. Macdonald and Kathleen Scherf Broadview edition of Frankenstein was published in 1992. A Broadview edition includes a variety of contextual materials from the era in which the work first appeared—and does not include modern critical essays.

That contextualizing approach has been warmly welcomed by a great many academics for a great many courses. But for some purposes, it’s simply not a good fit. When instructors are assigned first year “Approaches to Literature” courses, for example, where the expectation is that two or three works of literature will be covered in depth from a variety of different critical and theoretical approaches, many naturally think first of Norton Critical Editions or Bedford Case Studies in Contemporary Criticism. But many have also said to us over the years that they wished they could use Broadview editions in such circumstances—that they could have the richness of historical contextualization that Broadview offers plus a rich selection of modern theoretical perspectives.

As of this fall, we will be able to offer just that for three of our most popular titles.

Because these materials are online, of course, it’s possible to offer far more variety (and far greater choice to the instructor) than is possible in a bound book critical edition. And it will be possible to add to and revise each site easily and quickly.

Senior Editor Laura Buzzard of Broadview has led the way in preparing material for these sites; she’s been assisted by various others at Broadview—and we’ve received a great deal of assistance from academics as well. Jeffrey Spears of NYU has provided invaluable advice on the selection of visual materials. John Peters of the University of North Texas has acted as general editor of the Heart of Darkness site—and has done a superb job. And many others have provided invaluable advice.

What will the cost to students be to access one of these sites? Just $6.95—for access in perpetuity, not for a six month or one year access period. And the price goes down if access is purchased together with a new copy of the relevant Broadview edition. The Broadview edition of Frankenstein, for example, currently sells for $12.95; the price for the bound book plus access to the Online Critical editions Frankenstein website is just $15.95.

For any academic who would like to check out these sites with a view to possibly choosing them for future courses, access is free, of course; just let us know and we’ll send you an access code. In the meantime, a sample Table of Contents and some screenshots are included below for your information.

I do hope you’ll check out Broadview’s new Online Critical editions—and that you’ll give one or more of them a try with your students in the near future!

The Table of Contents for Frankenstein is below; contents for Heart of Darkness and The Strange Case of Jekyll and Hyde are listed on the Broadview website. 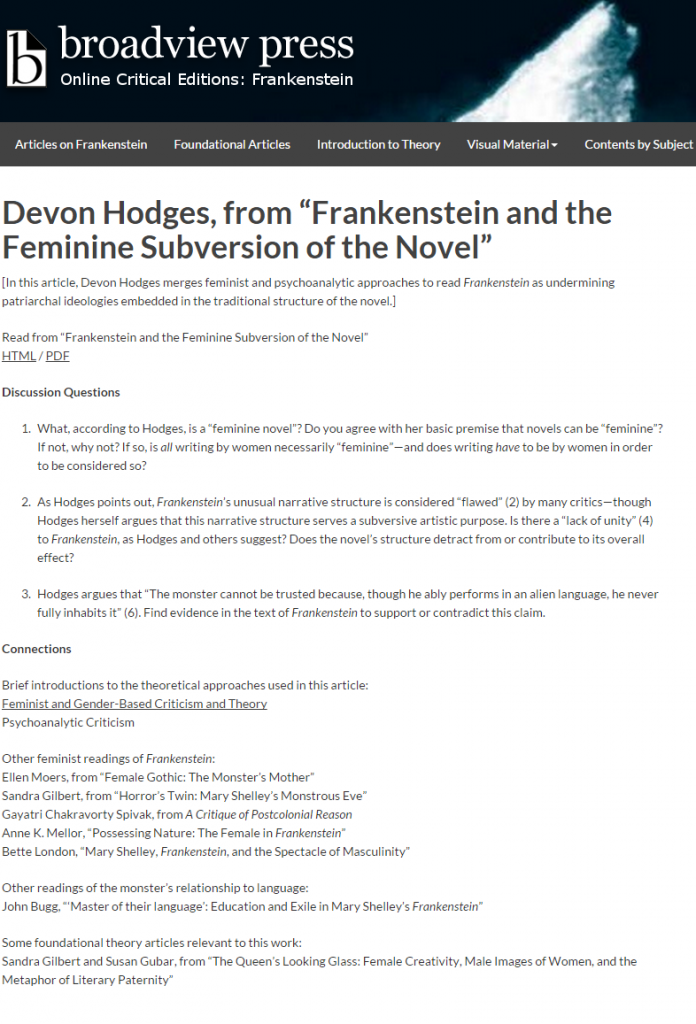 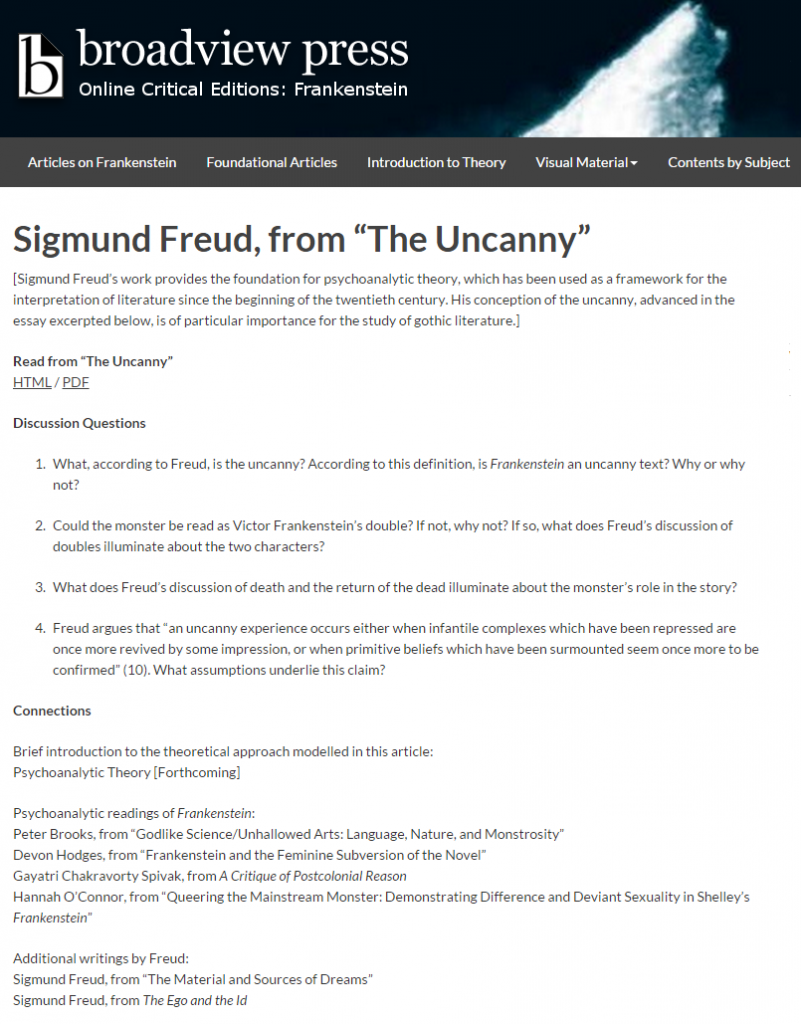