On The Piazza Tales and Its Literary Contemporaries

[Brian Yothers, editor of our new edition of Melville’s Piazza Tales shares his thoughts on reading the stories in their literary contexts.] 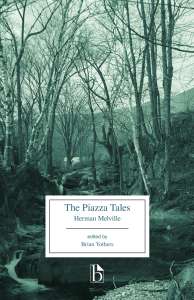 We often read “Bartleby, the Scrivener,” Herman Melville’s most famous short story, as if it is detached from the literary history of its time. One of Melville’s earliest reviewers, however, noted important connections among the various stories in The Piazza Tales, and, notably, between Melville’s style in these tales and Edgar Allan Poe’s “concentrated power of gloom”:

The book takes its name from the first story of six, which are here re-collected from the magazines in which they originally appeared. They are called respectively ‘The Piazza,’ ‘Bartleby,’ ‘Benito Cereno,’ ‘The Lightning-Rod Man’—a story which excited great attention when originally published in Putnam’s Monthly—‘The Encantadas, or Enchanted Islands,’ and the ‘Bell Tower.’ All of them exhibit that peculiar richness of language, descriptive vitality, and splendidly sombre imagination which are the author’s characteristics. Perhaps the admirers of Edgar Allan Poe will see, or will think that they see, an imitation of his concentrated power of gloom in the wild, weird tale, called ‘Bartleby’: in the ‘Bell Tower,’ as well, there is a broad tinge of German mysticism, not free from some resemblance to Poe.

This review is featured in the new Broadview Edition of The Piazza Tales, which emphasizes both Melville’s connect to contemporaries like Poe and Nathaniel Hawthorne and how he re-envisioned the nineteenth-century short story in the one collection that was published in his lifetime, tracing such wide-ranging matters as literary form, race and slavery, technology, scientific discovery, and philosophy across the stories. “Bartleby, the Scrivener” is often studied as one of the representative masterpieces in the short story tradition, alongside not just Hawthorne and Poe, but Edith Wharton, Franz Kafka, Flannery O’Connor, James Baldwin, and Raymond Carver, but considering it in the context of Melville’s own experiments with the short story genre can make our encounter with it even richer. “Benito Cereno” has become one of the most widely studied texts in nineteenth-century American literature for its disturbing and complex treatment of a slave revolt; “The Encantadas,” a series of sketches from the Galapagos Islands which was the favorite part of the collection for Melville’s contemporaries captures a unique intersection of the emerging biological sciences and the European literary tradition; and “The Bell-Tower,” “The Lightning-Rod Man,” and “The Piazza” engaged crucial questions regarding faith and doubt, nature and technology. Reading these stories together and in the context of their time means that we have a wider view of what the short story meant to nineteenth-century readers and what it can mean to us than if we merely read the stories on their own.