The following is an excerpt from our recently published Introduction to Indigenous Literary Criticism in Canada, edited by Heather Macfarlane and Armand Garnet Ruffo. 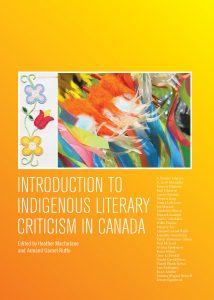 Lenore Keeshig [Tobias], Anishinaabekwe, was born on Neyaashiinigmiing (the Cape Croker Reserve) on the Saugeen Peninsula in Ontario. An Ojibway journalist, storyteller, poet, children’s author and activist, she is a founding member—along with Daniel David Moses and Tomson Highway—of the influential literary group “The Committee to Reestablish the Trickster,” Keeshig [Tobias] fought actively to promote Indigenous voice and writing throughout the 1980s, and into the 1990s—at a time when many Indigenous writers found themselves shut out of the publishing industry. Keeshig [Tobias] became one of the most influential spokespeople of the appropriation of voice controversy which started in the Writer’s Union of Canada, when she asked non-Natives to “stop stealing Native stories” …

“Stop Stealing Native Stories” appeared in the Globe and Mail in 1990 and is revolutionary for its condemnation of appropriation of voice. The article appeared as part of a larger debate that condemned the critics of those speaking in the voice of others, accusing them of censorship … Overlooked by non-Indigenous critics focusing on the censorship question, the related issues of retention and promotion of Indigenous language and cultural sovereignty are at the heart of Keeshig’s [Tobias] concerns.

AAA-III-EEE Y-AAh!
Clear the way.
In a sacred manner I come.
The stories are mine!
—Ojibway war song

Critics of non-native writers who borrow from the native experience have been dismissed as advocates of censorship and accused of trying to shackle artistic imagination, but their objections are prompted by something much more.

Where the Spirit Lives may be a bad film. Bone Bird by Calgary novelist Darlene Barry Quaife may oversimplify native spirituality.(1) W.P. Kinsella’s Hobbema stories(2) may be insulting. But the real problem Is that they amount to culture theft, the theft of voice.

Canada’s francophones have a strong and unique voice in North America. Why? Because they have fought to ensure that their language remains intact. Language is the conveyor of culture. It carries the ideas by which a nation defines itself as a people. It gives voice to a nation’s stories, its mythos.

How do Canadians feel about the US mythos defining them and their country? This is quickly becoming a reality, I fear, because Canadians have been too quick to hand over their voice and their stories to Americans.

Stories, you see, are not just entertainment. Stories are power. They reflect the deepest, the most intimate perceptions, relationships and attitudes of a people. Stories show how a people, a culture, thinks. Such wonderful offerings are seldom reproduced by outsiders.

This is the root of the problem with Where the Spirit Lives, which deals with the treatment of native students in government-sponsored residential schools during the 1930s. The film has been shown on the CBC and TVOntario and as part of Canada Day at the recent festival in Palm Springs, Calif.(3)

So what is it all about, anyway? In the end, a little Indian girl and her brother ride off into the vast, uninhabited wilderness (Anne Shirley goes west?). They ride right out of the sentimentalized Canadian consciousness—stoic child warriors noble in defeat, marching home with Bible in hand. (A book of truth, perhaps, but whose?)

Native people were not involved in any creative aspect of the film. Their voice was heard only through cultural consultants hired to provide the nuances and insights lacked by the movie’s writer and producers.

Cultural insight, nuance, metaphor and symbols give a book or film the ring of truth, but their essence—the thing that gives stories universal appeal, that allows true empathy and shared emotion—is missing from Where the Spirit Lives, as it is from most “native” writing by non-natives.

Canadians all too often use native stories, symbols and history to sell things—cars, tobacco or movies. But why hasn’t Basil Johnston’s Indian School Days become a bestseller? Why hasn’t Half Breed by Marla Campbell been reprinted?(4) (Why, for that matter, has Ms Campbell, as one of Canada’s “celebrated” authors, never received a writer’s grant?)

Where the Spirit Lives, after having squeezed out the native version of what happened in the residential schools, turns around and tells natives to make their own movies. How can we? Even if we had access to financial backers, they would say: “Residential schools? It’s been done.”

With native people struggling for justice with land claims and in education, what makes Canadians think they have equality in the film industry? In publishing? With agencies that make arts grants? In the arts themselves?

Instead, the Canadian cultural industry is stealing—unconsciously, perhaps, but with the same devastating results—native stories as surely as the missionaries stole our religion and the politicians stole our land and the residential schools stole our language. As Leslie Marmon Silko writes in Ceremony,(5) stories “are all we have, you see—all we have to fight off illness and death.” As a storyteller I was once advised by an elder that there is a season for storytelling—winter. “Blackflies, mosquitoes and other creatures like those stories,” she cautioned.

How quaint, I thought. Nonetheless, I respected her advice and, as time went on, I began to understand it. If storytellers sit around all summer telling stories, then surely they’ll become the feast of blackflies and mosquitoes. My elder was telling me that these stories are meant for certain ears only—and native ears.

So potent are stories that, in native culture, one storyteller cannot tell another’s story without permission.

But why are Canadians so obsessed with native stories anyway? Why the urge to “write Indian”? Have Canadians run out of stories of their own? Or are their renderings just nostalgia for a simpler, more “at one with nature” stage of human development? There’s a cliché for you.

Maybe Canadian stories about native people are some form of exorcism. Are they trying to atone for the horrible reality or native-Canadian relations? Or maybe they just know a good story when they find one and are willing to take it, without permission, just as archaeologists used to rob our graves for museums.

What about the quest for native spirituality? It is mostly escapist, and people such as Ms. Quaife would rather look to an ideal native living in never-never land than confront the reality of what being native means in Canadian society.

For example, residential-school survivors tell of children being forced to eat their own vomit when their stomachs could no longer hold down the sour porridge. They tell of broken knuckles from fingers being rapped. Some even tell of having pins stuck through their tongues as punishment for speaking their own language. (Now, that’s censorship.)
And what about the teacher who was removed from one residential school for abusing children? He was simply sent to another, more remote school.

It’s not that these stories have never been told; Canadians just haven’t heard them. Nor does it mean our writers and storytellers are incompetent and inexperienced, as Mr. Kinsella seems to suggest.
It means our voices have been marginalized. Imagine, Canadians telling native stories because their government outlawed native languages, native culture.

However, as Ms Campbell said on CBC Radio’s Morningside, “If you want to write our stories, then be prepared to live with us.” And not just for a few months.

(1)Darlene Barry Quaife, Bone Bird (Turnstone P, 1989), winner of the Commonwealth Writers Prize for Best First Book.
(2)William Patrick (W.P.) Kinsella is the prolific and controversial author of what he calls his “Indian stories,” set on the Hobbema Reserve in central Alberta. These books include Dance Me Outside (1977), also a feature film, The Fencepost Chronicles, winner of the 1987 Stephen Leacock Medal, Brother Frank’s Gospel Hour (1994), and The Secret of the Northern Lights (1998).
(3)Where the Spirit Lives is a dramatic film about Aboriginal children in Canada residential schools. Written by Keith Ross Leckie and directed by Bruce Pittman, it aired on CBC Television in 1989 and released in the USA in 1990. It was screened at numerous film festivals, including the Palms Springs International Film Festival.
(4)Maria Campbell, Halfbreed (Toronto: McClelland & Stewart, 1973).
(5)Leslie Marmon Silko, Ceremony (New York: Viking Penguin, 1977).