From James Boswell, The Life of Samuel Johnson (1791)

[The following is an excerpt from Appendix F in our recently published The Life of Mr Richard Savage, written by Samuel Johnson. You can see more information about our new edition, edited by Nicholas Seager and Lance Wilcox, on our website.] 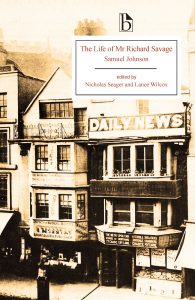 The young Scots law student James Boswell (1740-95) first met Johnson in 1763, and the two formed a lasting friendship, much of which Boswell recorded in his extensive journals. Boswell’s Life of Samuel Johnson appeared originally in 1791.

But he produced one work this year, fully sufficient to maintain the high reputation which he had acquired. This was “The Life of Richard Savage;” a man, of whom it is difficult to speak impartially, without wondering that he was for some time the intimate companion of Johnson; for his character was marked by profligacy, insolence, and ingratitude: yet, as he undoubtedly had a warm and vigorous, though unregulated mind, had seen life in all its varieties, and been much in the company of the statesmen and wits of his time, he could communicate to Johnson an abundant supply of such materials as his philosophical curiosity most eagerly desired; and as Savage’s misfortunes and misconduct had reduced him to the lowest state of wretchedness as a writer for bread, his visits to St. John’s Gate naturally brought Johnson and him together.

It is melancholy to reflect, that Johnson and Savage were sometimes in such extreme indigence, that they could not pay for a lodging; so that they have wandered together whole nights in the streets. Yet in these almost incredible scenes of distress, we may suppose that Savage mentioned many of the anecdotes with which Johnson afterwards enriched the life of his unhappy companion, and those of other Poets.

He told Sir Joshua Reynolds, that one night in particular, when Savage and he walked round St. James’s-square for want of a lodging, they were not at all depressed by their situation; but in high spirits and brimful of patriotism, traversed the square for several hours, inveighed against the minister, and “resolved they would stand by their country.”

I am afraid, however, that by associating with Savage, who was habituated to the dissipation and licentiousness of the town, Johnson, though his good principles remained steady, did not entirely preserve that conduct, for which, in days of greater simplicity, he was remarked by his friend Mr. Hector;  but was imperceptibly led into some indulgencies which occasioned much distress to his virtuous mind.

That Johnson was anxious that an authentick and favourable account of his extraordinary friend should first get possession of the publick attention, is evident from a letter which he wrote in the Gentleman’s Magazine for August of the year preceding its publication.

In February, 1744, it accordingly came forth from the shop of Roberts, between whom and Johnson I have not traced any connection, except the casual one of this publication. In Johnson’s “Life of Savage,” although it must be allowed that its moral is the reverse of–“Respicere exemplar vitæ morumque jubebo,”[1] a very useful lesson is inculcated, to guard men of warm passions from a too free indulgence of them; and the various incidents are related in so clear and animated a manner, and illuminated throughout with so much philosophy, that it is one of the most interesting narratives in the English language. Sir Joshua Reynolds told me, that upon his return from Italy he met with it in Devonshire, knowing nothing of its authour, and began to read it while he was standing with his arm leaning against a chimney-piece. It seized his attention so strongly, that, not being able to lay down the book till he had finished it, when he attempted to move, he found his arm totally benumbed. The rapidity with which this work was composed, is a wonderful circumstance. Johnson has been heard to say, “I wrote forty-eight of the printed octavo pages of the Life of Savage at a sitting; but then I sat up all night.”