I want to tell you a story 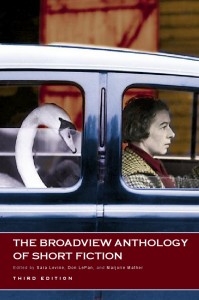 The newly published third edition of The Broadview Anthology of Short Fiction is a unique collection of 45 stories, with more works from the past 20 years and a greater representation of American authors than previous editions. In her Preface to the anthology, editor Sara Levine—herself a celebrated fiction writer—comments on the ways in which stories change, and how they remain innately the same, as we look at samples throughout history.

When a person says I want to tell you a story, you grasp the rules of the game. What follows should not be a mathematical formula, or a series of images, or an argument against capital punishment, though a story may contain all those things. “Story” means something will happen to somebody. In fiction these expectations can be messed with—extended, transformed, or joyfully ignored— but always they’re there. An anthology of stories whose publication spans the nineteenth to the twenty-first centuries invites you to think about how a story’s procedures may be related to its origins in a specific historical place and time. Read Hawthorne and Poe, and then pick up Chekhov; you will feel a change. The author’s attitude toward the characters is different, as is the idea of where a story should begin and end. Leap ahead to Barthelme, and you will sense that the writer cares about something different. The narrator of “The Palace at 4 A.M.” is mixed, being—rather inexplicably—part-man, part-donkey. But the language is also a crazy mingle. Trained to expect magic in stories about kings and queens, we easily can accept the presence of a “bogle,” but what a shock to learn the bogle is charged with a “tax evasion case”! And since when does a prince in an “ermine robe” carry a “Walther .22”? The verbal planes keep shifting, and the reader, alongside the lovelorn king, is left “in a condition of doubt.”

“There is but one art, to omit! O if I knew how to omit, I would ask no other knowledge. A man who knew how to omit would make an Iliad of a daily paper. He learns it in the crystallization of daydreams.” Thus wrote Robert Louis Stevenson in a letter to his cousin; regrettably, we didn’t include any of Stevenson’s daydreams in this anthology. But it is impossible to include every writer I love and still make a book you can carry without self-injury. Here, then, are the chosen ones, 45 in all. Some are realistic; some are fantastic, some are of conventional length and one is less than a page long. I love these stories for what they do as well as what they refuse to do. They are all paragons in the art of omission.