Horatio Alger and the Myth of Social Mobility

“Americans vastly overestimate the likelihood of moving up the economic ladder,” Jeff Guo posits in his January 18 article for the Washington Post in which he discusses the myths and reality of social mobility in America.

Drawing from Gary Scharnhorst’s introduction to Broadview’s forthcoming edition of Horatio Alger’s social mobility novel, Ragged Dick, Guo draws a sharp comparison between the believed possibility of social mobility – the belief in the American Dream – and the harsh reality of the current economic state of America.

Over the past fe 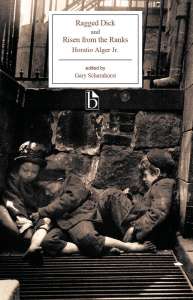 w years as we have watched the political climate change in the west, it has become increasingly apparent that the stories we tell ourselves about the possibilities of change are often more influential than the economic realities of our time. “Among many Americans,” Guo argues, “there remains a stubborn faith in the power of self-determination.”

However, this story that Americans have told themselves might not be based in a correct reading of one of the foundational stories the belief stems from. Alger’s narrative legacy in the American imagination is one self-fashioning and the ability to “rise from the ranks,” as it were.

Guo points out that “Alger’s legacy has been shaped by a kind of willful misremembering.” His novels, as Scharnhorst argues in his introduction, are actually morality tales about the virtues of hard work and honesty. “The typical Alger hero,” Scharnhorst claims, “therefore, improves his station as much by a stroke of luck . . . as by dint of hard work. He may deserve his good fortune, but he does not entirely earn it.”

Guo ends his piece by positing that “today, Alger’s plight illustrates a deeper truth about politics: The stories we tell are often more important than the underlying facts. In part, our misunderstandings about Alger’s work, like our misunderstandings about the true levels of intergenerational mobility, stem from a belief that the United States is a nation where opportunity exists for all. It’s unclear how long that optimism will persist.”