The Grass Cove Massacre from The Travels of Hildebrand Bowman 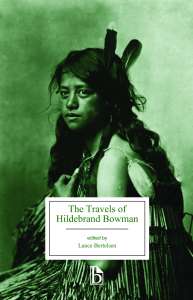 Inspired by an actual event on Captain Cook’s second voyage and often called “the first New Zealand novel,” The Travels of Hildebrand Bowman (1778) tells the story of a fictional midshipman abandoned in Queen Charlotte Sound, New Zealand, whose adventures take him to increasingly sophisticated cultures—hunter/gatherer, pastoral/nomadic, agricultural, and commercial—that dramatize stadial history in a Pacific setting. The excerpt below describes the historical incident (known as the “Grass Cove Massacre”) that launches Bowman’s South Sea odyssey.

At this, and the neighbouring islands, we continued till September 17th, getting all the fresh provisions we possibly could, wooding and watering. During this time Captain Furneaux took on board a native of Ulietea called Omai.[1] From Ulietea we steered to the Friendly Islands,[2] and arrived at that of Amsterdam October 3d. On the 7th, sailed toward New Zealand, and on the 30th, were again separated from the Resolution in a gale of wind. We were not able to fetch Queen Charlotte’s Sound,[3] but were obliged to anchor, November the 9th, in Tolaga Bay; and on the 30th, got at last into Charlotte Sound in New Zealand. There Captain Furneaux found, by a letter Captain Cooke had left for him, in a corked bottle hid under ground, with directions to dig for it, that the Resolution had been there, and sailed on the 24th. We immediately set about getting the ship ready for sea; and by the 17th of December she was so.

That day Captain Furneaux sent Mr. Rowe and Mr. Woodhouse, Midshipmen, with eight of his best hands, on shore, in the large cutter, to gather wild greens, such as celery and scurvy-grass, to carry to sea with us. I being a keen sportsman, begged leave to go with them, to try if I could meet with any game; which being granted, I took a fusee[4] with me, and sufficient ammunition, both ball and small shot; with some baubles to trade with the natives, if I met with any. I know not by what mistake Captain Furneaux, in his letter to Captain Cooke, which he left for him at the Cape, makes no mention of my being in the cutter.[5] It proved, however, a happy one; for tho’ my family have been in the greatest anxiety about my fate, they had no apprehensions of my being devoured by creatures of my own species.

The cutter first went to East Bay; but what was wanted not being in plenty there, we proceeded to Grass Cove, [6] where there was abundance. While the men were employed in gathering them, I walked into the woods, to try if I could meet with any game; not having the least suspicion of an attack from the natives. My sport happened to carry me farther from our men than I intended; and I was greatly alarmed with the report of some musket shot from that quarter. I immediately ran full speed to their assistance; but before I got half-way, the firing ceased; and a horrid scream was set up which could only come from the savages; and seemed not of distress, but victory. This stopped my career, and made self-preservation appear a necessary duty. I therefore proceeded with caution towards the place; resolving, if possible, to keep myself unseen, by the covert of the woods, while I explored the scene of action. But, good God! what a horrid spectacle appeared! all our men lying dead on the place, and surrounded by some hundreds of savages, of both sexes and of all ages. I was at first tempted to fire among them; but considering that by so doing I should put them on searching for me, and it would be impossible to escape, I restrained my resentment; but continued sometime longer in my lurking-place, to observe their actions. But how shall I relate the horrid feast which was prepared for that multitude? the fire was kindled, and the mangled limbs of my poor countrymen and shipmates, were put on it to broil for their unnatural repast; nay even some parts I saw devoured. I could stand it no longer, horror seized me! my whole frame was in the most dreadful tremour! and scarcely able to support me in withdrawing into the woods: I staggered about without knowing what I did, or meant to do; excepting only the getting at a distance from those vile cannibals.

[1] Omai (Mai), a young Ra’iātean, joined the Adventure from Huahine, in the Society Islands, in August 1773. On his arrival in London in October 1774, he was introduced to society by Sir Joseph Banks and became a celebrity, meeting George III, Lord Sandwich, Samuel Johnson and others. He was especially close to the Burney family, whose son James served as a midshipman on Cook’s second voyage and whose sister, the novelist Frances Burney (1752–1840), left vivid descriptions of his behavior while in London. The author of Hildebrand Bowman mentions Omai as his friend in the first sentence of his dedication in an attempt to establish a connection to his celebrity.

[3] The easternmost sound on the northern coast of   New Zealand’s South Island. On his first voyage, Cook had used Ship Cove, on the west coast of the sound, as his headquarters. He returned to it four times during his later voyages.

[5] The author attempts to explain why he is not listed in documents related to the Grass Cove Massacre. A cutter is the second or third largest of the various boats carried on board Royal Navy ships. It could range in length from 18 to 25 feet.