Environmentalism in a Market Society 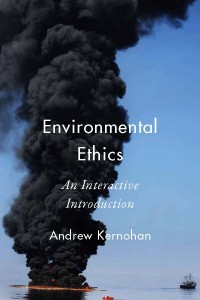 When it comes to the implementation of environmental laws and economic policies, political and ethical decisions are rarely made in isolation—often, they’re influenced by long-standing value systems and deeper metaphysical commitments. In Environmental Ethics: An Interactive Introduction, Andrew Kernohan outlines the connections between conflicting positions on environmental policy and the worldviews in which those positions are grounded. The following excerpt explores the market worldview and its conceptual foundations.

The conceptual framework of market society accepts the understanding of nature given to us by modern science. It stresses, however, a particular idealization of human nature that permits the development of economics. Its core empirical theory of human nature, which is a version of psychological egoism, sees human beings as rational agents. Rational agents pursue their own self-interest. Each agent tries to maximize the expected value of her own utility. In doing so, she is risk neutral. She calculates the value of each option by multiplying how much she is willing to pay to have that option by the probability that her actions will bring it about, and then chooses the course of action that has the maximum expected payoff. She cooperates with others for mutual benefit according to the rules of the free market. This conception of human nature is the conception of economic man or Homo economicus—a word play on the name of our species, Homo sapiens. This view of human nature has a history. It did not exist in hunter-gatherer societies that emphasized the virtues of sharing over those of accumulation. It came into being with the growth of capitalism, and now seems natural to us.

It is perhaps easiest to see the conceptual framework of modern industrial economies by comparing it to a different one, the conceptual framework prevalent in Medieval Europe. People in Medieval European society had a shared worldview based on a biblical cosmology, a Ptolemaic and geocentric view of astronomy, and an Aristotelian and teleological notion of science. Its view of the nature of things and its view of the nature of human beings were both religious. Humans were immortal souls trapped in sinful, animal-like bodies. It had a divine command theory of ethics, based on priestly interpretation of the Bible. It had an obvious logic of domination embodied in a hierarchical chain of being, with God at the top, angels below God but above humans, and humans morally superior to animals, plants, and the rest of the environment. 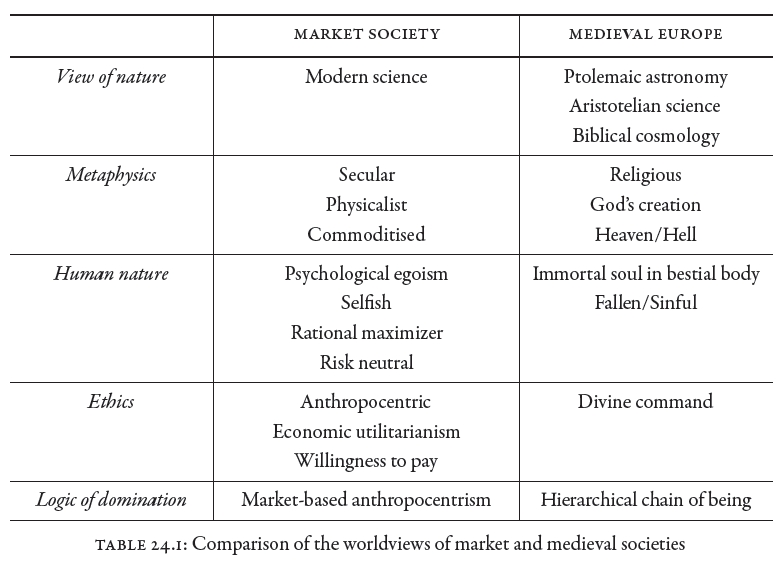