Encyclopédie and the Enlightenment 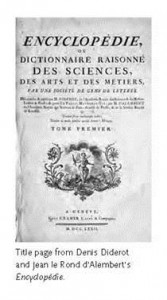 Denis Diderot and Jean le Rond d’Alembert’s Encyclopédie was a landmark publication of the 18th century, both in terms of its scope and its distribution. Although the encyclopedia had existed as a genre for centuries prior (one of the most notable contributions being Pliny the Elder’s Natural History in 77 CE), the scale of the Encyclopédie was unprecedented, encompassing twenty-eight volumes, over 3000 illustrations, and scholarly articles from renowned contributors such as Voltaire and Rousseau.

The project captured the Enlightenment’s devotion to knowledge and inquiry and was a milestone in the movement toward a modern age of secular scholarship; in d’Alembert’s words, the Encyclopédie was a “genealogical tree of the arts and sciences,” an ode to achievements and discoveries in history, mathematics, science, and the arts. Just as impressive as its intellectual breadth was the enormous undertaking of printing the Encyclopédie, which reached full publication in 1780 with a print run of 4000 copies—an impressive number in the world of eighteenth-century publishing.

To read more about early publishing projects, see Chapter Three: The Printing Revolution in Solveig Robinson’s The Book in Society.