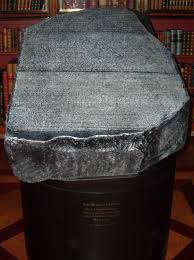 We know it now as a popular program for learning languages like French, Spanish, or Italian, but the original Rosetta Stone was the key to unlocking the meaning of early hieroglyphic inscriptions. In 1799, after centuries of misinterpreting the Egyptian writing system, French soldiers came across a stone located in the Egyptian city of Rosetta; the stone featured a decree written in Greek as well as in demotic and hieroglyphic. By first deciphering the Greek script, several scholars were eventually able to determine the words and names represented by the accompanying hieroglyphic symbols. By 1822, accomplished linguist Jean-Francois Champollion, working from copies of the inscriptions on the Rosetta stone, had made the discovery that hieroglyphics could be read phonetically—and there began the study of modern Egyptology.

This topic is discussed at length in Chapter One: Origins of Solveig Robinson’s newly published The Book in Society.