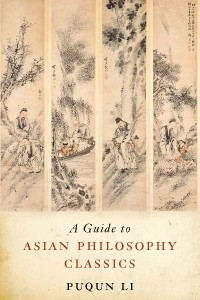 Puqun Li’s A Guide to Asian Philosophy Classics is filled with interesting comparisons between Asian and Western thought. These comparisons not only make the great works of Asian philosophy accessible to Western readers, they also shed light on familiar philosophical issues. Here’s an excerpt in which Li connects ideas from the Analects of Confucius to Western views regarding religion and the afterlife:

It is tempting to conclude from this passage that Confucius has so emphasized the importance of serving the living that he has simply dismissed questions about spirits and death. However, as Tu Wei-ming has pointed out, the “assertion that knowing life is a precondition for knowing death by no means implies the rejection of the need for knowing death. On the contrary, precisely because one cannot know death without first understanding the meaning of life, a full appreciation of life entails the need for probing the meaning of death.” Confucius talks about the importance of offering sacrifice to one’s deceased ancestors, but this does not assume the existence of an afterlife. In his view, in offering sacrifices to one’s ancestors and the gods, one only needs to act “as if” (ru) they were present. This suggests that he was agnostic about the afterlife, but still believed in the practical value of offering sacrifices to one’s ancestors in shaping one’s moral character. This interpretation is consistent with what we know about Confucius’ concern about living this life ethically in this world. It is not likely that Confucius had ever explicitly denied the existence of ghosts and spirits, or it would have rendered baseless his advice to his contemporaries to continue to practise the sacrificial rituals of ancestral worship. As Confucius’ rival Mozi (c. 470–c. 391 BCE) pointed out, if there is no fish, what is the point in making fishing nets? If there is no guest, what is the point of conducting a welcome ceremony? That said, there is still no need to assume that Confucius was in fact a “closet believer” of ghosts and spirits. If this had been the case, he would have been plagued by the question of how to prove their existence—a question that he would treat as impractical and irrelevant.

It does not really matter for him whether the deceased continues to enjoy some form of post-mortem existence. What really matters for him is how people regard death from an ethical point of view. Confucius claimed that when people show proper respect to the dead at the time of their passing and in an ongoing manner after they have long passed away, the strength of their moral character (de) will thrive. In other words, Confucius seems to be suggesting that the practice of mourning the dead can become care for the living.