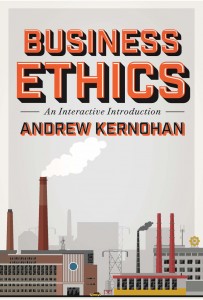 Andrew Kernohan’s forthcoming book, Business Ethics: An Interactive Introduction, not only explains various business-relevant applications of ethical theory, it also invites readers to practice those applications through interactive digital exercises. The text includes over 400 such exercises, along with videos, flash cards, and other digital materials (all included with no registration or additional cost beyond the book’s modest student price of $29.95).

Here’s a sample of one of the book’s case studies and its accompanying interactive questions. Can you score 10/10?

What Should Carol Do about Workplace Safety?

Carol Walters is a production manager for World Auto Parts, a large manufacturer of transmission components for cars and trucks. Transmission parts production is a very competitive sector. If WAP’s production cost were to rise, then WAP’s two main competitors would rapidly take over WAP’s markets.

WAP has the advantage of a loyal and experienced workforce who have nearly all been with WAP for over ten years. WAP is not unionized, but it does pay well. One reason that the employees stay with WAP is that there are no other jobs available in the local area.

Technology, however, has not stood still. Most of the machinery that was up-to-date ten years ago has gone obsolete, and WAP has replaced many of the machines on which employees originally worked. One such machine is the Sterling Gear Press Mark IV, with which WAP recently replaced the slower Mark III model. This new machine is the mainstay of gear production in the factory, and many employees now run it. WAP has installed the new Mark IV on the factory floor beside the older Mark III machines. Both of WAP’s competitors have also upgraded to the new Mark IV machine in the same way.

Carol and another production manager, Phil Thomas, have recently noticed that the injury rate on the new machines is higher than the injury rate on the old machines. There appears to be a defect in the design of the safety cover of the Mark IV. The new design causes workers who use the machine to strain their backs and left arms. Because the new machine is so much faster than the old version, production has gone up. The savings to WAP have outweighed the cost of downtime and time off for injured workers taking sick leave. WAP gives sick pay at 60% of regular wages, and only for 10 days per year.

The situation does not violate local Occupational Safety and Health regulations. Still, it is in Carol’s interest to fix the problem because, as a production manager, she will likely end up being blamed by senior management. Carol and Phil discuss how WAP could do something about the situation. They believe that if they both independently talk to their boss, Joan Ross who is the VP of production at WAP, then Joan will believe them that there is a workplace-safety problem. Joan could order them to inform the operators of the new machines about the problem. Joan could also order the machine operators to slow down and be more careful. Alternatively, Joan could order the operators to resume using the Mark III machines, which still sit beside the new models. Any of Joan’s possible responses will put WAP at a competitive disadvantage, unless Joan can convince both of WAP’s competitors to do the same. Even if WAP’s competitors verbally agree to follow one of these workplace-safety strategies, Joan would not be certain that she could trust them actually to implement the strategy.

Complicating the situation is the issue that Carol and Phil are competing for a promotion to Senior Supervisor. In the past, Carol has not always kept her word to Phil, or done her share of work on group projects. She does not think Phil trusts her. If Phil and she independently tell Joan about the safety problem, then Joan may do something, and Carol will still be in competition for the promotion. However, if one of them does not follow through and tell Joan, then Joan will likely do nothing about the safety issue, and Joan will likely not promote the seeming naysayer and troublemaker who did bring up the safety issue. If neither tells Joan, then nothing will happen and the competition for promotion will continue.

Analyze the ethical issues in the situation facing Carol, paying particular attention to any cooperation dilemmas. Should Carol tell Joan about the workplace-safety issue?