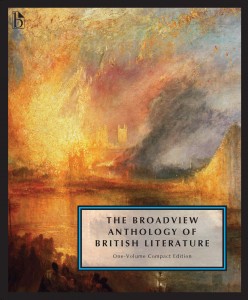 In the publishing world it’s common for people to speak of the “big books” for the season. They don’t usually mean 2,178 pages in length, 1.85 inches in thickness, and 4.38 lbs. in weight. That’s what the new one-volume Compact edition of The Broadview Anthology of British Literature comes in at—and we’re not joking when we call it “compact.”

The competition here is The Norton Anthology of English Literature one-volume Major Authors edition, which runs to 3,072 pages, 2.48 inches think, and 4.44 lbs.—longer, thicker, and heavier than the Broadview.* Even within English Studies, neither Broadview nor Norton can claim the dubious distinction of heavyweight champion. That title appears to be currently held by the 4th edition of Duncan Wu’s Romanticism: An Anthology, for which the publishers (Wiley-Blackwell) chose a heavy, glossy paper stock, the result being that a book of 1,640 pages weighs in at 4.96 lbs. In the sciences and the social sciences, of course, textbooks even heavier than that are routine.

Why do publishers do it? In Broadview’s case, I can attest that we conducted extensive editorial research before deciding to go ahead; it was clear that there was indeed a desire on the part of many instructors for a new one-volume anthology designed to suit the needs of courses covering the full sweep of British literature, from the medieval period to the twenty-first century.

It’s not hard to see why many academics prefer to have their students use one, large course text. If one sometimes likes to discuss, for example, some of the links between Tennyson and Malory, or between Yeats or Heaney and the early Irish lyric, it’s much less convenient to do so if one half of each pairing is to be found in a volume that no student is likely to have brought to class.

The most important thing about any book will always be its contents, of course—and in this new incarnation we’re confident that the Broadview will continue to be regarded as “the new standard” among anthologies of British literature. These days more than ever, though, it’s vitally important for publishers to think not only of words and illustrations, but also of the heavy load that students carry. When we do publish large texts, we should strive for the best possible balance between paper opacity and paper lightness. We should pay close attention to the experience of reading a thick book. We should make e-book alternatives available for those students who wish to take advantage of them. And we should price each book as reasonably as we possibly can.

In each of these respects, I’m very proud of what we’ve done with the one-volume Compact Edition of The Broadview Anthology of British Literature. Thanks largely to the work done by Managing Editor Tara Lowes in choosing paper stocks, there’s remarkably little see-through, even on pages where an illustration appears on the reverse. The wide format we use means that the bound book lies flat on the desk much more easily than does the one-volume Norton. The book is priced at just $69.95—considerably less than the one-volume Norton.** And for those who would prefer something even less expensive (and even lighter!), we have also made the anthology available as an e-book, priced at only $48.95 when purchased through our website.

PS  Of course, for those of you who prefer to teach a survey course from a handful of slim paperbacks, we have hundreds of great choices!

* Other points of comparison include the complete 6-volume versions of the Norton and the Broadview (each totaling over 6,000 pages), the two-volume version of the full Norton anthology (each volume of which runs to over 3,000 pages), Broadview’s own two-volume Concise Edition (each a relatively slender 1,700 pages), and various versions of the third entrant in the field, The Longman Anthology of British Literature.

** In fairness, I should say that the Norton also seems to me to offer excellent value; it’s a competitor that we at Broadview have the greatest respect for—as do we for its general editors, and its publisher.