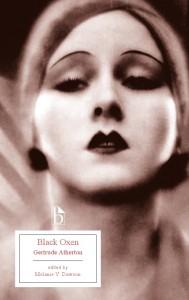 Many Broadview Editions are of works from the 1910s or earlier, so a feature of a newly published edition was unusual for us: appendix material related to a contemporary film adaptation. The novel, also the subject of a popular 1924 film, is Gertrude Atherton’s Black Oxen (1923), edited for Broadview by Melanie Dawson. The story of a beautiful and mysterious woman in her late fifties whose uncannily youthful appearance is the result of an experimental “rejuvenation” treatment, Black Oxen was a natural fit for a film adaptation. The 1924 First National film, starring Corinne Griffith and featuring Clara Bow in a minor part, was both a popular hit and critically acclaimed:

Evening World: “‘Black Oxen’ is a novel chock full of dramatics and hence has, in the capable hands of Frank Lloyd, blossomed forth as a fine stalwart bit of picture making.”

Sun Globe: “‘Black Oxen’ seems to us a fantastic, brilliant story, fully as good as any of Edith Wharton’s novels of society. The picture follows the book operation for operation, one might say, and it is one of the photoplays that ought not to be missed.”

Motion Picture: “The gowns and furs, as well as jewels worn by Miss Griffith constitute a veritable fashion parade which moves throughout the picture. The production itself is an elaborate one. The settings, especially the interiors are the last word in artistic lavishness.”

In a bizarre echo of the novel and film’s plot, the film’s star, Corinne Griffith, later claimed, in her seventies, to be her own much younger sister.