The Rules of the Game

An Excerpt from The Grasshopper, Third Edition, by Bernard Suits 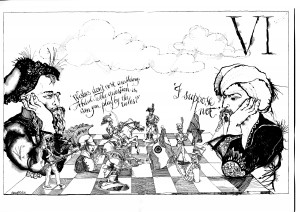 In this passage, the Grasshopper explores the possibility of playing a game without any rules.

Ivan and Abdul [I began] had been officers of general rank before each was retired and ‘elevated’ to the post of ambassador in the backwater capital of Rien-à-faire. Both had established brilliant military careers in the service of homelands which had frequently been at war with one another, and Ivan and Abdul had in fact been opposite numbers in many engagements. So the two warriors were overjoyed at the opportunity their appointments afforded them for going over all of their old campaigns together. But after a few months, when they had reviewed all the victories and defeats from every possible angle and refought all the old battles under every conceivable modification of logistics and tactics, they grew weary of their reminiscences and sought other diversions.

Sport seemed an obvious pastime for a couple of shelved warriors to take up, since sport seemed to them to be a kind of substitute, or polite, kind of warfare. It soon became evident to them, however, that sports were like warfare in only the most superficial respects. Specifically, they found that sports were hedged round with the most outrageously arbitrary restrictions. In golf, for example, you were expected to use a golf club to get your ball out of a sand trap even when your opponent could not see what you were doing. And in tennis, you were expected to call a ball foul or fair honestly even when your opponent was not in a position to check your call. Chess was no better, since surreptitiously to alter the location of pieces on the board – obviously an effective tactic – was ruled out.

But since they could find nothing better to do to occupy their time, they continued to play these games, although – as the diplomatic colony to its delight soon became aware – with a difference. Whenever the rules could be broken without detection or retribution, they were broken. Although this approach was ultimately doomed to failure, it worked very well for a time, and a number of breathtaking refinements were added to most of the conventional games. Thus to golf was added, among other things, the use of self-propelling radar-controlled golf balls, and to chess the use of hallucinogenic drugs as an offensive weapon. On the tennis courts Abdul achieved a much admired coup by hiring two men to raise and lower the net at appropriate times, until this was countered by Ivan’s introduction of the net-piercing tennis ball. Things reached their fated conclusion in a climactic chess match.

In preparing themselves for the contest both contestants had countered the possible use of drugs by taking suitable antidotes, and each was determined to keep a very keen eye upon the other throughout the match. The first game proceeded normally for six moves. Then Ivan made the move which was the beginning of the end. Utterly ignoring the rules governing movement of the pieces, he illegally moved his queen to a square which put Abdul in check. The fascinated audience waited breathlessly for Abdul’s response to this outrage. It was not slow in coming. He simply removed Ivan’s queen from the board and put it in his pocket. Ivan in turn was quick to respond. In a trice he had nimbly rearranged the pieces on the board so that Abdul’s king was in checkmate, crying, ‘I’ve won!’

‘Wrong, my friend,’ screamed Abdul, and gathering up all of the pieces except his king, he flung them to the floor.

‘Abdul, you can’t do that,’ said Ivan in outraged tones. ‘I won the game the moment you were in checkmate.’

‘So you say,’ responded Abdul, ‘but you were obviously mistaken, for there stands my king, quite free to move.’

Ivan had not, of course, expected such a transparent tactic to succeed with the wily Abdul. It had merely been a diversionary move so that he could, while his opponent was momentarily distracted, secure Abdul’s king to the board with the quick-drying glue he had all along held ready in his hand beneath the table. Then, of course, before you could say ‘scimitar,’ Abdul snatched a bottle of solvent from his tunic and freed his king. Ivan’s hand immediately shot out towards the king, but Abdul grabbed his wrist in time to forestall the assault. For a full minute they were locked in a frozen tableau of force and counterforce (evoking spirited applause from the audience), before they broke apart, leapt from their chairs, and began to circle each other warily. Then they joined battled in what was to become a truly mythic contest, for

They fought all that night

And the din it was heard from afar.

So great was the fame

Of Abdul and Ivan Skavar.