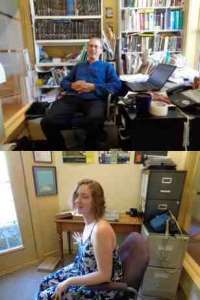 On August 1st 2017, in its 11th year of publication, the Managing Editorship of The Broadview Anthology of British Literature will be changing hands. The anthology was conceived of and spearheaded by Don LePan, founder and CEO of Broadview Press. His Managing Editor role will now be taken on by Laura Buzzard, Senior Editor at Broadview, who joined the company in 2010. Laura has been Assistant Managing Editor for the anthology since 2014; she has always done extraordinarily fine work, and she has already proven herself adept at the full range of activities required to manage a project of this scope. We do not see this development as a harbinger of any change of direction for the anthology; indeed, more than anything else it’s simply confirming as a matter of job title a change that has already been in process for at least a couple of years. Don LePan will continue in his role on the General Editorial team and he will continue for some time to be heavily involved in the day-to-day development and management of the anthology.

More information about The Broadview Anthology of British Literature is available on our website.