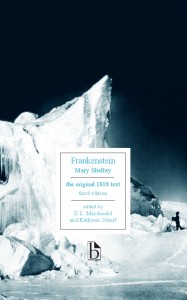 There are many competing editions of most of the Broadview Editions (BEs) published by Broadview Press. Our main competitors are usually Penguin, Norton, Oxford, and Modern Library. It is crucial to the success of the BE series that we maintain not just a competitive price with these publishers (as we do) but also a distinctive identity.

The distinctive identity of BEs derives primarily from the STUDENT CENTRED philosophy of the series. This can be understood through reflection both on what BEs are and what they are not. Although striving to achieve the highest scholarly standards, they are NOT scholarly editions. For example, while a scholarly edition will—or certainly should!—provide exhaustive textual apparatus and commentary, including all the minutiae of textual variants, BEs include only those textual variants that significantly affect meaning or interpretation. Most undergraduate students will not worry too much over a comma in one early edition of a novel being replaced by a semi-colon in a later edition. And all other features of a BE focus on what will interest and what will help the student.

I think it best to define BEs as TEACHING EDITIONS. How can a BE best meet the needs of student readers and assist the instructor in leading students to an appreciation and understanding of the text?

First, the INTRODUCTION must be comprehensive and informative in addressing issues such as the author’s life and career (complemented by a CHRONOLOGY of the author’s life); the circumstances in which the work was conceived and first published; the wider social, literary, political, and economic context of the work; the work’s main themes; how it was initially received; how subsequent generations of critics and readers have received it; and why the work still matters today. And while avoiding condescension towards the student, the introduction must hit the right tone and intellectual level, neither assuming too little knowledge and understanding from the student, nor too much. But all of this is pretty well what introductions to other editions try do as well (with varying degrees of success).

The differences begin to show in the text itself. The selection of the copy text for the BE text has to be explained and justified in a NOTE ON THE TEXT—again, a fairly common feature of competing editions. But then things begin to get interesting. While the notion that an ANNOTATED text prejudices interaction between reader and text is not widely supported, there is still evidence of some publishers harbouring scepticism about the value of annotations. The textual annotations in some editions are either sparse, or relegated to the end of the text, or both. This approach is also driven in part by a sense that the student readers should be doing some of the work to figure out things they don’t understand. If they don’t know what a Hippocratic oath is, or what picayune means, or what the Wars of the Roses were, look it up! Comprehensive annotations just encourage laziness, don’t they? Well, that’s a noble sentiment, no doubt, but the reality is that students need and appreciate editorial help, and BE editors are there to provide it. And students appreciate such help conveniently located in FOOTNOTES (not endnotes) and they appreciate annotations that are both comprehensive and concise. Lengthy annotations that show off an editor’s learning are as frustrating as annotations that finish before they have left the starting gate.

And then we move to the APPENDICES. Most competing editions have appendices of one kind or another. The distinctive feature of the BE appendices is that almost invariably they are drawn from sources contemporary with the main text of the BE. If it’s an eighteenth-century play the appendices will reflect the eighteenth-century context by drawing on eighteenth-century sources. Other editions often use modern sources—e.g., modern critical essays or modern historical discussions. Our view is that direct contact with contemporary sources is an enriching complementarity for the students and also gives them access to sources (such as newspapers, memoirs, political debates, letters) that are otherwise difficult to find. Modern critical essays, on the other hand, are now easily accessible through university library websites.

The final segment of a BE is again common in most competing editions, a SELECT BIBLIOGRAPHY of primary and secondary sources (sometimes also incorporating Works Cited). The idea here is not to overwhelm the students with pages of books and essays, but to be selective. What really matters? What will be most helpful to students seeking further information on and analysis of the novel, play, or poems?

So we do have a template that seems to work and to be appreciated, but that doesn’t mean that we rigidly stick to it. If a BE editor feels strongly that some variance from the norm is warranted we’re good listeners!

L.W. Conolly is Professor Emeritus of English at Trent University, Peterborough, Ontario, an honorary fellow of Robinson College, Cambridge, a senior fellow of Massey College, Toronto, a Corresponding Scholar of the Shaw Festival in Niagara-on-the-Lake, Ontario, and a Fellow of the Royal Society of Canada. He has published widely on British and Canadian drama and theatre, and has been series editor of the Broadview Editions since 2002.